Montenegro is on the verge of becoming NATO's latest member after the US Senate voted to clear the way for a final vote on its accession. Backers of the move said it would send a stern message to Russia. 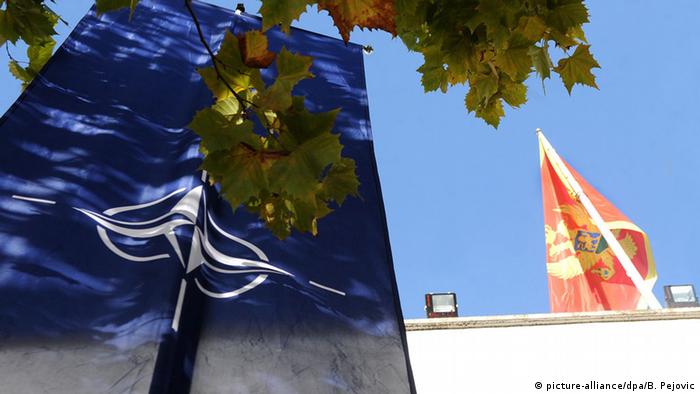 The flags of NATO (l) and Montenegro displayed side by side

Progress on Montenegro's accession bid had been held up in Congress by two senators.

Besides the US, the Netherlands and Spain also have yet to ratify Montenegro's membership. All members of the alliance must ratify a bid to join in order for the petition to proceed.

Montenegro sits on a geopolitical faultline in the region. Having elected a pro-EU government last October, the outcome of its NATO application could determine the way the region is heading: toward NATO and the EU, or back to Russia's sphere of influence.

The only two "no" votes came from Republican Senators Rand Paul and Mike Lee, both of whom had blocked the vote for several months.

Paul warned Washington against spreading itself too thinly when its military is involved in Iraq, Syria, Libya and Yemen. "Montenegro in NATO will antagonize Russia while doing nothing to advance US national security," he said.

Moscow has rejected allegations that it was involved in a plot to assassinate Montenegro's prime minister. A Montenegrin prosecutor had said the alleged conspiracy was aimed at halting the country's NATO integration. (20.02.2017)

"Most Americans can't find Montenegro on a map," Paul said in a sharply worded Senate speech. "Are you willing to send your kids there to fight?"

Paul has suggested that adding Montenegro, which had once been a staunch Russian ally, could lead to heightened tension with Moscow, possibly even war.

Senator John McCain framed Montenegro's accession as a "test" of resolve against Putin. "He attempted a coup" to overthrow the freely-elected Montenegro government," McCain told the Senate on Monday. "That coup failed. But I can assure that if we turn down Montenegro, it will not remain the democracy that it is today."

President Donald Trump's administration has encouraged lawmakers to back the Balkan nation's NATO bid. Secretary of State Rex Tillerson wrote to Senate leaders earlier in March to say Montenegro's membership of NATO was "strongly in the interests of the US."

Tillerson said Montenegro's membership would give NATO a contiguous border along the Adriatic coast.

"Montenegro is trying to do everything that (Russian President Vladimir) Putin hates, where you actually can vote for your own leaders," said Republican Senator Lindsey Graham, one of the party's leading foreign policy voices.

NATO holds its summit on May 25 in Brussels, where Trump will use the opportunity to reaffirm Washington's strong commitment to the alliance, according to the White House.