The obstruction of the bill in a show of party loyalty to former President Donald Trump sparked outrage from Democrats. 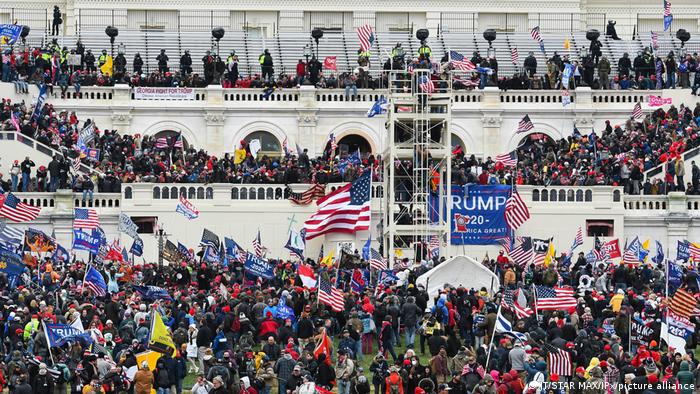 US Senate Republicans on Friday blocked a bill that would set up an independent commission to investigate the deadly riot at the Capitol building on January 6.

The bill had bipartisan support from Democrats and a few moderate Republicans in the chamber.

Why did the bill fail in the Senate?

The bill failed to pass the chamber in a 54 to 35 vote. The Senate filibuster requires 60 yes votes for legislation to move forward, or else it will be blocked.

Six Republicans joined Democrats in the chamber to vote in favor of the legislation.

The obstruction is the first Senate filibuster of Joe Biden's presidency. The legislation passed the Democratic-majority House of Representatives earlier this month.

Republican Senate Minority Leader Mitch McConnell, who led the charge of the bill, claimed the legislation is partisan and said the commission would duplicate the work done by other congressional committees.

"I do not believe the extraneous 'commission' that Democratic leaders want would uncover crucial new facts or promote healing. Frankly, I do not believe it is even designed to," McConnell said in a speech on the Senate floor on Thursday.

How did Democrats react to the obstruction?

"We all know what's going on here. Senate Republicans chose to defend the Big Lie because they feared that anything that might upset Donald Trump could hurt them politically," Democratic Senate Majority Leader Chuck Schumer said after the vote.

He tweeted that the "Big Lie has now fully enveloped the Republican Party."

The "Big Lie" refers to the erroneous claims made by former President Donald Trump and his supporters that the 2020 presidential election was stolen due to voter fraud.

Democratic Senator Dick Durbin of Illinois said there should have been 100 votes for the legislation, and claimed "Republicans still fear the truth and the wrath of Donald Trump."

Trump has previously called the bill a "Democrat trap." He continues to insist that the election was rigged, well into the Biden presidency.

What happened at the Capitol on January 6?

On January 6, members of Congress convened in the Capitol to certify Biden's win against Trump during the 2020 election. The congressional counting of electoral votes is the final step in cementing Biden's victory.

That same day, Trump hosted a rally of supporters nearby. He railed against the election results and said they were "rigged." Shortly after he concluded his speech,  Trump supporters moved towards the Capitol, with some of them breaking into the building while lawmakers were inside.

The rioters demanded Congress reject Biden's victory and called on former Vice President Mike Pence, who was supervising the counting ceremony, to reject the constitutionally-mandated procedure.

In response, the lawmakers inside hunkered down or moved to other safer locations away from the rioters. The Trump supporters eventually breached the Senate chamber, before being repelled by security.

Five people died and at least 138 police officers were injured amid the civil disorder. Some rioters were hospitalized from the chaos.

The National Guard was deployed to deal with the riot. The rioters were eventually pushed back from the building, with lawmakers convening that evening to continue the electoral vote counting process, securing Biden's win.

The riot stirred outrage from some lawmakers, who believe it jeopardized their safety. In response, the House impeached Trump for the "incitement of insurrection," although the former president was ultimately acquitted in the Senate.

The Capitol riot has remained a pertinent issue in American society, as the building had not been breached since 1814.