The US Senate has authorized a bill capping domestic surveillance by the NSA. The vote came after weeks of heated debate over how to balance privacy and security, and the lapse of key counterterrorism laws on Sunday. 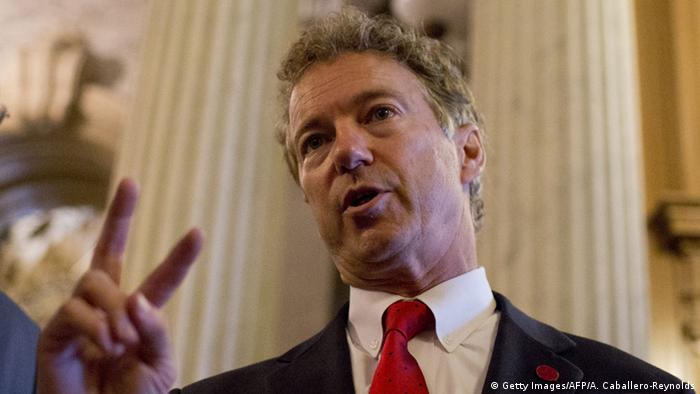 The US Senate approved a bill on Tuesday that will reform how the National Security Agency (NSA) accesses and collects Americans' telephone records.

The bill will also reauthorize surveillance measures that had temporarily lapsed after libertarian Senator Rand Paul (pictured above) from Kentucky, who did not think the reforms went far enough, forced debate on the law to go into overtime.

The vote to end the bulk collection of US telephone data marks a reverse of security policy that has been the norm in the United States since shortly after the terrorist attacks on September 11, 2001.

"It's a historic moment," said Senator Patrick Leahy, the senior Democratic sponsor of the bill, known as the USA Freedom Act.

Leahy described it as "the first major overhaul of government surveillance laws in decades."

After being passed by the House of Representatives last month, Tuesday's 67-32 vote brought an end to weeks of angry debate over how to strike a balance between privacy concerns and the threat of terrorist violence.

After rejecting three modifications to the House-approved bill, all bureaucratic hurdles were finally overcome and the bill was immediately sent to the White House where it was signed by President Barack Obama. The legislation will allow some of the controversial NSA programs to resume, but with significant changes.

The NSA has six months to completely wind down the bulk collection of telephone data, after which time the government will be required to obtain a warrant to ask for telecommunications companies for Americans' phone records.

Tuesday's turn of events was seen as a victory for whistleblower Edward Snowden, who revealed the NSA's bulk data collection program to the public in June 2013.

Some Senate Republicans, such as Majority Leader Mitch McConnell, had sought to amend the House bill by giving the NSA one year to wrap up the program instead of six months, and by adding a measure that would have forced telephone companies to notify the government on policy changes on how long they hold records.

The Senate rejected the proposed changes, paving the way for the final vote.

Beijing has accused Washington of promoting protectionism following Senate approval of a bill aimed at boosting US research and development in key technologies to compete with China.

Ukraine says Russian forces withdrawing from Kharkiv — as it happened 14.05.2022