US reject accusations that Joe Biden conspired against Venezuela

The United States has rejected as "patently false" the claims made by Venezuelan President Nicolas Maduro that Biden conspired to overthrow him. The South American country is struggling in an economic crisis. 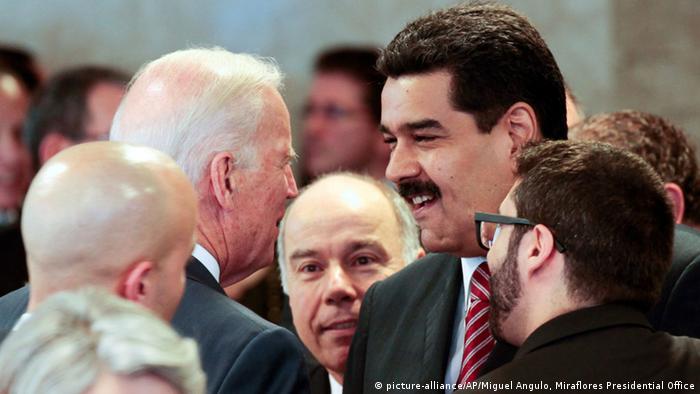 In a televised address, President Nicolas Maduro claimed that Biden had tried to incite the overthrow of the Venezuelan government during a Caribbean energy summit hosted by the American vice president in Washington last month.

According to Maduro, Biden told to the leaders of Caribbean nations that the government's days were numbered and it was time they abandon their support.

"What Vice President Joe Biden did has no name," Maduro said.

"Vice President Biden: Look me in the eyes. I saw you in Brazil, I gave you my hand. You, who said this is a new era for relations in Latin America, were going to conspire against Venezuela," Maduro added, referring to the impromptu meeting at the sidelines of Brazilian President Dilma Rousseff's swearing-in ceremony a month before.

Maduro had previously described the meeting as "cordial."

Biden's office declared on Monday that the accusations made by Maduro were an attempt to distract attention from the situation in Venezuela, "which includes repeated violations of freedom of speech, assembly, and due process."

The US State Department also said on Monday that it has imposed visa restrictions on unnamed current and former Venezuelan officials involved in human rights abuses as well as unidentified people believed responsible for public corruption.

"We are sending a clear message that human rights abusers, those who profit from public corruption, and their families are not welcome in the United States," the State Department said in a brief statement.

Maduro also said on Sunday that Venezuela had jailed the owners of an unnamed chain of stores for purposely creating lines to whip up anger against the government.

"Yesterday we detected that a famous chain of stores was conspiring, irritating the people," Maduro told a crowd of supporters.

"We came, we normalized sales, we summoned the owners, we arrested them and they're prisoners for having provoked the people," he said, adding that the state would take over the food stores.

"Those who use their stores to hurt the people will pay with jail time," Maduro said.

Venezuela is currently plagued by a deep economic crisis, aggravated by low oil prices. Inflation reached 60 percent in 2014, and consumers are faced with numerous shortages, including milk, flour, and diapers. Many store shelves remain empty and citizens are forced to wait in lines to by basic goods.

While the opposition blames government policies, especially when it comes to restrictions on the dollar, Maduro accuses the business elite of waging an "economic war" to bring down his government.