Two people were killed when the car crashed into a tree and burst into flames. Police suspect the Tesla Model S was operating on autopilot when the fatal accident occurred. 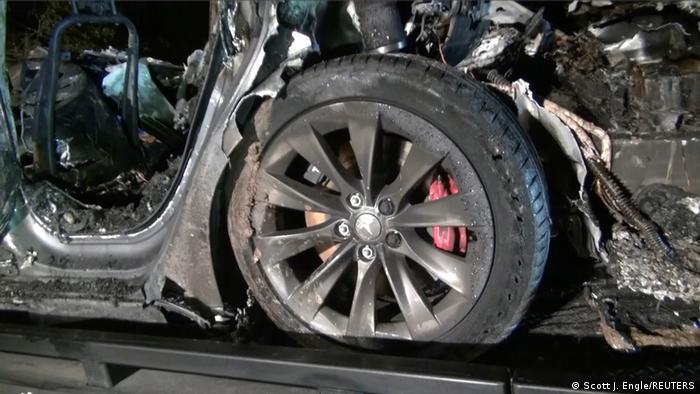 Tesla CEO Elon Musk says his cars are safe, consumer advocates and safety investigators are not as confident

US federal agencies on Monday began an investigation into a fatal car crash that killed two people outside Houston, Texas, over the weekend.

Local police say the accident occurred when a 2019 Tesla Model S, traveling on a residential road at high speed, missed a curve, struck a tree and burst into flames.

The National Highway Traffic Safety Administration (NHTSA) and the National Transportation Safety Board (NTSB) have "launched a Special Crash Investigation team to investigate the crash. We are actively engaged with local law enforcement and Tesla to learn more about the details of the crash and will take appropriate steps when we have more information," according to an NHTSA statement.

Local authorities say Harris County firefighters used more than 100,000 liters (26,417 gallons) of water to extinguish the fire as the battery repeatedly flared up after the flames were put out.

It was then that police discovered one occupant in the passenger seat and another in the backseat — with no one in the driver's seat. That fact led police to assume that the car was traveling in autopilot mode at the time of the crash.

Authorities '100% sure' no one was driving

On Monday, Harris County Constable Mark Herman said that investigators are "100% sure" that no one was driving the electric car when it crashed, though it remains uncertain if the vehicle was in "driver assist" mode or "full self-driving" mode.

Tesla CEO Elon Musk refuted allegations that the vehicle had been on autopilot, writing on Twitter that "data logs recovered so far show Autopilot was not enabled."

Police said they were preparing to serve search warrants to Tesla Inc to view data from the car, Reuters reported.

However, US authorities are currently investigating a number of crashes, some fatal, in which autopilot was being used.

Kelly Funkhouser of the non-profit consumer advocacy outfit Consumer Reports says Tesla has been providing inaccurate numbers about its safety record for years, adding: "You just have to take their word for it" when it comes to vehicle performance.

A slew of investigations into fatal crashes involving Teslas

The NHTSA has also come in for its share of criticism regarding the oversight of autonomous driving systems, most recently from the NTSB. It complained that its approach was "misguided because it essentially relies on waiting for problems to occur rather than addressing safety issues proactively," noting that the NHTSA had "taken a non-regulatory approach to automated vehicle safety."

The US government is investigating Tesla's partially automated driving system after crashes that left one person dead and 17 people injured.