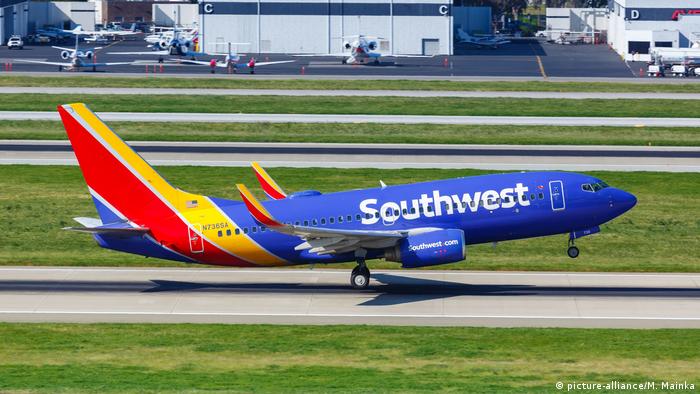 The US aviation regulator says it has launched an investigation after a 12-inch (30.5cm) crack ruptured the skin of a Boeing 737 aircraft operated by Southwest Airlines, causing the plane to gradually lose cabin pressure.

The Federal Aviation Administration (FAA) stepped in on Friday after a plane gradually lost cabin pressure during a flight from Las Vegas to Boise, Idaho.

Flight records revealed that the pilots began a rapid, six-minute descent from 39,000 feet (990 meters) to 22,000 feet.  No injuries were reported from the incident, on Monday, and the cabin pressure was safe at the lower altitude, the agency said.

The FAA said an inspection discovered the crack in the skin of the plane's crown but that it was too early to say whether the frequency of inspections should be increased.

Airlines are required to inspect the skin of a plane's crown behind the cockpit every 1,500 flights.

Southwest spokeswoman Michelle Agnew said the aircraft had been inspected for any cracks within the required 1,500-flight period.

She said the pilots had "followed standard procedures by descending to a lower altitude to maintain a safe and comfortable cabin environment" and that the move "resolved the issue."

Agnew added that the jet was now in a maintenance facility undergoing repairs of the crack.

A  Boeing spokesperson said the manufacturer was aware of the incident and was collaborating with Southwest to learn more, the Associated Press reported.

The Dallas-based low-cost carrier has faced increased scrutiny following several incidences where it has failed obligatory inspections for fatigue cracks on some of its planes. Just last month, the Transportation Department's inspector general said the airline flew jets it bought without having first verified their maintenance and repair histories.

"Many officials throughout the FAA have expressed concern about the safety culture at Southwest Airlines," the department said. The airline has denied the allegations.

Cracks in other jets

The Wall Street Journal, citing people familiar with the matter, said Southwest told the FAA that mandatory inspections had found external cracks in two other aircraft in the same area but that those cracks didn't result in cabin decompression.

Maintenance experts say cracks are usually caused by fatigue or wear and tear and are not uncommon in older planes.

Inspections are put in place to ensure they are repaired before they pose a threat to safety.

In 1988, an Aloha Airlines flight attendant was blown out through a hole of a Boeing 737 as it flew over the Pacific Ocean, prompting stricter regulations.

Boeing grounded its Max series aircraft last year after deadly crashes were linked to faulty software. The company, however, remains optimistic that its fleet will receive the green light to go wheels up by summer. (19.02.2020)

Boeing officials have described the new aircraft as "the flagship for the big airlines around the world." The US company is hoping to bounce back from a dismal year that saw two of its 737 MAX planes drop from the sky. (25.01.2020)

The US aerospace giant said it is "keeping our customers and suppliers informed" about the new software issue. Aviation regulators have grounded the 737 Max across the globe after two deadly crashes. (18.01.2020)