US oil prices crash below zero for first time ever

Having already hit a 20-year low early in trading, West Texas Intermediate oil prices collapsed later on Monday. Longer-term prices were more robust, but futures for delivery in May were valued at effectively nothing. 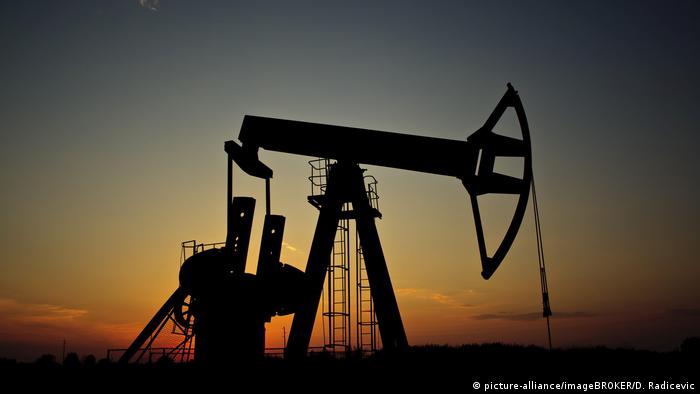 The benchmark US crude price headed into the negatives for the first time ever on Monday, following a day of record declines.

The West Texas Intermediate (WTI) benchmark fell to below -$30 as the May contract deadline approached, meaning sellers would pay buyers to take the papers off their hands before the deadline by the time the bell rang on Wall Street.

The drop comes amid a one-third decrease in demand for fuel, and a global halt to industry, travel and economic activities that normally utilize oil.

The price for May contracts on Monday burned all value, revealing the oversupply in the US oil market.

Sellers of the May contract have just one day left to find buyers for the oil, but are struggling to find those buyers. Storage tanks could hit their limits within three weeks, Chris Midgley, head of analytics at S&P Global Platts, told US news agency AP. Storage could be a key driver in the negative price, seeing as buyers have to take the oil they've reserved but then run the risk of paying more for alternative storage solutions.

US oil prices rebounded on Tuesday to above zero, with traders now focusing on the contract for June delivery.

After the plummet, President Donald Trump said the US would look into buying up to 75 million barrels of oil to replenish the national strategic reserves — but only if Congress approved of the funding. "That would be the first time in a long time it's been topped out — we'll get it for the right price," Trump said of topping up the nation's emergency crude oil stockpile.

The strategic petroleum reserve is located in four locations near the Gulf of Mexico and was originally created to protect the US from oil shortages. The reserve can store up to 727 million barrels of oil.

'No place to put it, got to flush it'

"It also implies that some folks are trying to get out of the May contract to the best of their ability without a lot of time left," said Yawger. "I've seen some ugly expirations in my life but this obviously is an all-time record holder."

Prices for deliveries even further into the future also took a nosedive, with the WTI contract for June delivery falling by 14.8% to $21.31 per barrel.

An oil price war was already waging prior to the coronavirus shutting down many of the world's major economies. As Saudi Arabia, Russia and the US all sought to increase supply, a massive dip in demand was waiting right around the corner.

US oil drops below $15 as storage sites fill