Fire on US Navy ship rages for second day after explosion

The USS Bonhomme Richard, an amphibious assault ship docked in San Diego, has been engulfed in flames for two days as authorities scramble to contain the fire. At least 59 people have been injured in the blaze. 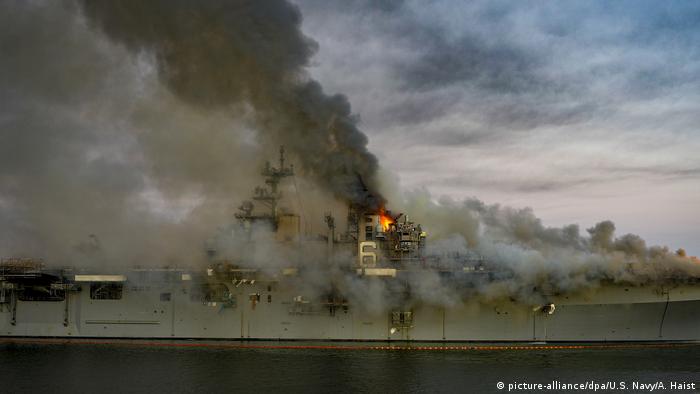 First responders were battling a fire on board the USS Bonhomme Richard, an amphibious assault ship moored at a San Diego shipyard, for a second day on Monday. At least one large explosion was recorded on the ship, which began listing to its starboard side.

Fifty-nine people, including 36 sailors and 23 civilians have been treated for heat exhaustion, smoke inhalation and other injuries related to the fire. A top navy official said that the ship's fire suppression system was inoperable when the blaze erupted.

Hundreds of sailors were working to keep the flames away from 3.7 million liters of oil on board the ship. The US Coast Guard hired an oil clean-up crew in case of a spill. Boat traffic within one nautical mile and flights over the vessel were also halted. 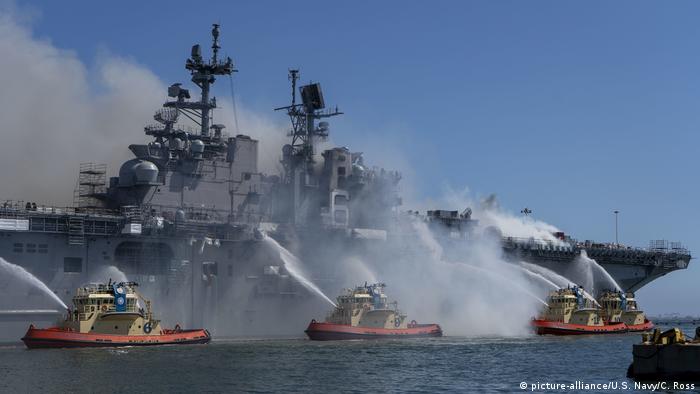 Rear Admiral Philip Sobeck said fire temperatures had reached up to 1,000 degrees, causing the mast of the ship to collapse and threatening the central control island where the captain operates the vessel. ''In the last 24 hours, 400 sailors have been on board that ship to make sure that, you know, we make every effort to save that ship,'' he said. Sobeck also said it was too soon to give up on saving the ship.

This is one of the US Navy's worst shipyard fires in recent memory. The fire is said to have originated in a lower cargo area, where cardboard boxes, rags, and other ship supplies were being stored.

Smoke from the fire wafted across the city. The San Diego Air Pollution Control District warned that concentrations of fine particulate matter could reach unhealthy levels, and advised people to avoid exercising outdoors. 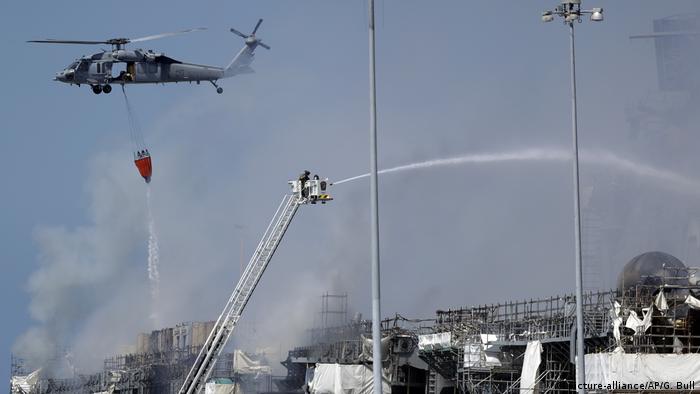 The ship has been docked at San Diego since 2018 for maintenance work. The fire suppression system had been turned off as part of the ongoing maintenance. The system uses halon, a liquefied gas that restricts chances of fire by cutting off oxygen.

Retired navy captain and professor of International Maritime Law at Fordham University, Lawrence B. Brennan, told AP that it was common deactivate the halon system while the ship was being worked on. He also added that the navy had not compensated enough for the deactivation of the suppression system, and had ''poor or no fire boundaries'' in place, he said.