US Military to Keep European Command in Germany | Germany| News and in-depth reporting from Berlin and beyond | DW | 20.08.2004

US Military to Keep European Command in Germany

The US plans to maintain a key military presence in Germany even after it completes its troop restructuring. Three new brigades will come to Germany despite plans for a broad withdrawal of Cold War-era deployments. 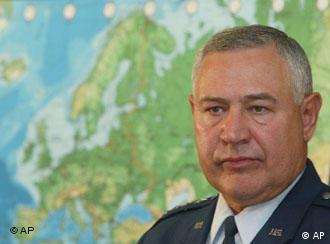 "The real issue is not the percentage of troops leaving, so much as there will still be a significant capability left here, and it will be transformed to be more mobile, more light, and more responsive," Wald said at a news conference at European Command headquarters in Stuttgart.

Wald also said some bases in Germany, such as the Ramstein air base in the west of the country, would be expanded, despite plans to withdraw some 30,000 troops currently stationed here. Another base at Spangdahlem, home to two US F-16 squadrons, will remain as well, Wald said.

US President George W. Bush announced the withdrawal on Monday, as part of plans to completely restructure US military deployments around the world to better fight terrorism.

Stryker location to be decided

Wald said the location of the Stryker brigade still needs to be negotiated with the German government, though there are rumors that it will be based at the US training range near the Bavarian town of Grafenwöhr.

The withdrawal of thousands of soldiers from the two heavy divisions in Germany -- the 1st Armored based in Wiesbaden and the 1st Infantry based in Würzburg -- will not happen before 2006, so that the views of the German government can be heard, Wald said.

The news of the withdrawals caused dismay in many of the communities that evolved around the US army bases, as the livelihoods of many German residents depend on the soldiers' presence.

The planned withdrawal of thousands of US troops from Germany has many communities worried about the economic consequences. One place likely to be hit especially hard is the town of Baumholder in southwestern Germany. (Aug.19, 2004)

The impact of US plans to pull some 70,000 troops out of Europe and Asia is likely to be felt most acutely in Germany -- especially in smaller towns whose economies depend on the US presence. (Aug. 17, 2004)

German Defense Minister Peter Struck is pushing through the most radical reform of the German army to date despite the impending massive US troop withdrawal from Germany. Opposition voices have questioned his wisdom. (Aug.18, 2004)