US Midwest hit by winter freeze colder than Antarctica

A record arctic air mass will remain over the central and eastern United States over the next several days. Several people have died in the dangerously low temperatures, which have now moved to the Northeast.

Two people in the Detroit area died due to the dangerously low temperatures, and a University of Iowa student was found on campus in Iowa City before being taken to hospital, where he died.

An 82-year-old Illinois man who had fallen while trying to get into his home died several hours after he was found, authorities said.

The icy temperatures — which were expected to ease Thursday — have also grounded flights, disrupted travel, and closed schools and businesses.

The extreme cold has now settled in over the Northeast. In western New York, a storm that dumped up to 20 inches of snow (51 centimeters) gave way to subzero temperatures and dangerous wind chills. The arctic conditions caused problems from Buffalo to Brooklyn.

Those who do venture out were advised by the National Weather Service to cover their mouths and protect their lungs from severely cold air by not "taking deep breaths" and keeping talking to a minimum. 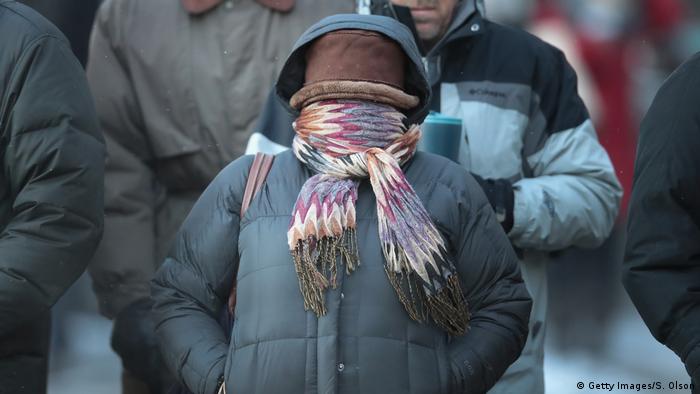 People were advised to avoid breathing in the freezing air

The freezing weather has been caused by the polar vortex, a mass of freezing air which usually rotates around the North Pole but has drifted south to the United States.

DW's Maya Schwayder, on the ground in Chicago, said that any exposed skin would get "frostbite within minutes" and that "even hair and eyeballs could freeze over."

Including the wind chill factor, parts of the Dakotas, Wisconsin and Minnesota had temperatures of -70 Fahrenheit (-56.7 Celsius), according to forecasters.

In Chicago, the morning temperature was -22 degrees Fahrenheit (-30 Celsius), which was colder than Alaska's state capital and parts of Antarctica. Much of the Chicago River was frozen over. 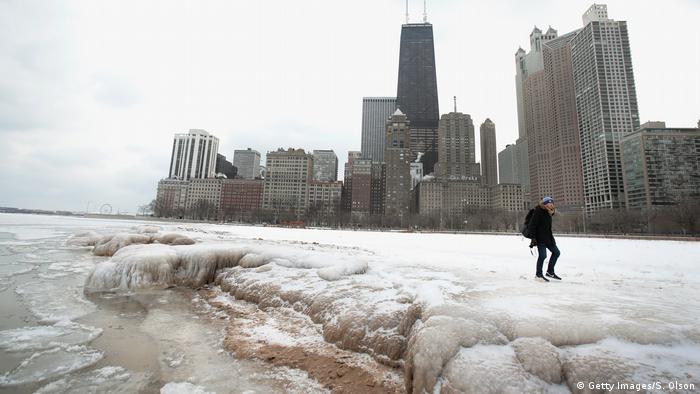 Lake Michigan in Chicago was covered in thick snow and ice

A total of 1,359 flights were canceled for Thursday, but conditions are expected to improve heading into the weekend.

Postal services were unable to deliver mail in parts of Indiana, Michigan, Illinois, Ohio, the Dakotas and Nebraska.

If temperatures reach -27 degrees Fahrenheit (-33 Celsius), it would be the coldest recorded temperature since January 1985.

Chicago city officials encouraged 80,000 homeless to ask for help: "3-1-1 offers a range of services to assist some of Chicago's most vulnerable residents," officials said in a statement on Monday. They added that the city offered "shelter for homeless residents, warming centers and well-being checks."

Thousands cut off by wintry weather in Austria, Germany

Two skiers have become the latest victims of the extreme weather hitting the Alps. The amount of snow falling has broken records in several ski resorts. (15.01.2019)

A new report has warned climate change could bring widespread hardship to the United States if nothing is done to stop it. President Donald Trump has downplayed the threat amid freezing temperatures this week. (24.11.2018)