A military jury has sentenced a US Marine Corps drill instructor to 10 years in prison over his treatment of new recruits and abuse directed toward Muslims. One of the recruits killed himself during training. 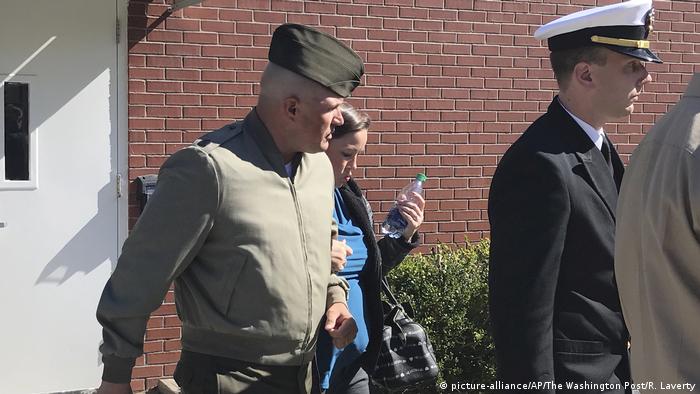 Gunnery Sergeant Joseph Felix was found guilty of extreme hazing of over a dozen Muslim recruits, and a military jury sentenced him to 10 years in prison on Friday.

Felix, 34, was found guilty of targeting other recruits as well, ordering them to choke each other, punching them, kicking them, and walking over them with other drill instructors. He also ordered them to drink chocolate milk and then forced them to train until they vomited.

Felix, an Iraq War veteran, was deployed at the Marine boot camp at Parris Island in South Carolina. According to the prosecutors, the drill instructor was particularly abusive toward Muslim recruits.

Inside the clothes dryer

Witnesses said he taunted the Muslims as "terrorists" or "ISIS," suggesting they were members of the jihadi "Islamic State" group. He also ordered Lance Corporal Ameer Bourmeche to simulate chopping off the head of a fellow Marine while saying "Allahu Akhbar."

At one point, he told Bourmeche to enter an industrial-sized clothes dryer and turned the machine on, asking the recruit "Are you still Muslim?" After Bourmeche reaffirmed his faith, he was forced to enter the machine again, after which he once again confirmed he was a Muslim. He was then sent for another tumble inside the machine that is designed to emit intense heat. After a third spin, Bourmeche said, he feared for his life and renounced his religion. Rekan Hawez, a native of Iraqi Kurdistan, was also ordered to climb into the dryer, although the machine was never turned on.

Accusations against Felix and several other instructors came to light after Raheel Siddiqui, a 20-year-old Pakistani-American, jumped to his death during training in March 2016.

Witnesses said Felix slapped Siddiqui and called him a terrorist, and that the recruit endured days of hazing before jumping over a third-story railing. In October, Siddiqui's family sued the Marine Corps for $100 million (€86 million), saying he was driven by an unnamed superior through a door and onto a balcony where he fell to the ground below.

While Felix was found guilty of abusing his recruits, he was never charged with causing Siddiqui's death. The judge did not allow testimony about a possible link between Felix's actions and the recruit's suicide.

The 10-year prison term is three years longer than the sentence demanded by the prosecutors. The case will now go into an automatic appeal procedure, set for rulings that involve lengthy prison sentences and dishonorable discharges.