A former US intelligence official has said he was pressured to stop investigating Russian election interference and was demoted when he refused. It wasn't the only time he claims he was asked to suppress information. 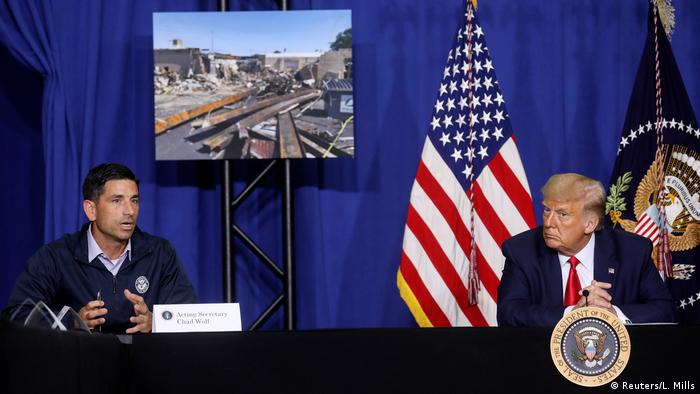 Murphy alleged that Chad Wolf (left in picture) told him to focus on China and Iran, rather than Russia

A former high-level US intelligence official said in a whistleblower complaint made public on Wednesday that he was pressured by his boss to stop providing intelligence assessments on the threat of Russian interference in the upcoming US election.

Brian Murphy, who was an intelligence analyst with the Department of Homeland Security (DHS), said that acting Homeland Security chief Chad Wolf (left in the picture above) told him in May 2020 to instead focus on the threat from China and Iran. Murphy's lawyers filed the complaint with his old employer the DHS, sending copies to various relevant individuals and institutions in US politics.

According to the complaint, Wolf told Murphy intelligence on Russian disinformation should be "held" because it "made the president look bad."

Murphy objected that it was improper to withhold vetted intelligence for reasons of political embarrassment. Murphy said that after he refused to comply, he was demoted.

The whistleblower complaint has called for an investigation into what it termed "retaliatory actions" taken against Murphy for compiling his intelligence reports.

The complaint outlined several other occasions when Murphy was pressured to amend details within intelligence reports that didn't match with policy objectives of President Donald Trump.

Read more:  Who's affected by Trump's US immigration ban?

The complaint also said Murphy was pressured in 2018 to provide intelligence assessments to support the Trump administration's claims that migrants with terrorist ties were crossing the southwestern border of the US. Murphy claimed to have said that he would not change the intelligence to overestimate the threat.

Nevertheless, former DHS Secretary Kirstjen Nielsen testified before the US Congress in December 2018 that 3,755 documented terrorists had crossed the border. According to Murphy's account, the number should have been three.

Murphy said in the complaint that Nielsen's testimony "constituted a knowing and deliberate submission of false material information."

Donald Trump fired the director of CISA, a federal agency in charge of securing US elections, after the agency rebuffed the president's unfounded claims of widespread voter fraud.