US heads into a new week shaken by police brutality protests

US cities are bracing for further unrest after being rocked by six days of anti-police brutality protests. President Donald Trump has been criticized for failing to call for unity, instead calling state leaders "weak." 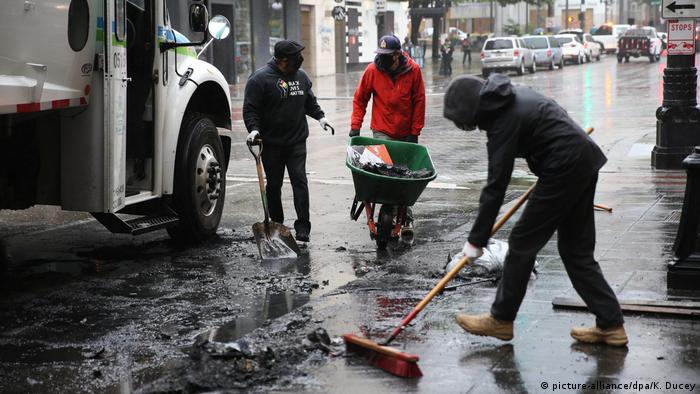 Residents in cities across the United States began sweeping up broken glass and assessing damage on Monday after a sixth consecutive night of protests that ended in violence.

Despite days of unrest, US President Donald Trump did not strike a unifying tone on Monday, instead deriding nation's governors and demanding tougher crackdowns on protesters.

"Most of you are weak,'' Trump said during a video call with governors. "You have to arrest people.''

Attorney General Bill Barr, who was also o the call, told state leaders they have to "dominate" the streets and gain control, urging them to "go after troublemakers."

Trump has yet to address the nation over the protests, preferring to fire off a barrage of tweets in which he sought to pin the blame for violence during the protests on left-wing groups.

Demonstrations against racial inequality and police brutality swept the nation this week after George Floyd, an unarmed black man, died in police custody in the city of Minneapolis. The white police officer who pressed his knee on Floyd's neck for nearly nine minutes was charged with murder on Friday.

Peaceful protests have been taking place across US cities, but instances of looting and rioting have prompted city officials to introduce curfews to avoid violence.

In Louisville, Kentucky one person was killed overnight when police and National Guard troops returned fire while trying to disperse a crowd.

Police in Minneapolis also arrested the driver of a semi-truck who barreled into thousands of protesters on a highway in Minneapolis on Sunday night. Officials said it appeared no one was injured.

Police and National Guard troops have also been criticized for their conduct with members of the press at protests, particularly for detaining and firing projectiles at journalists and camera crews.

DW reporter Stefan Simons, who has been reporting on the ground in Minneapolis, said he was shot at by police for the second night in a row on Sunday.

Simons and his crew were told to leave the area where a truck driver drove into protesters. Shortly after getting into the car, police then shot projectiles at the team.

On Saturday night, Simons' team was shot at by police, and, in a separate incident, he was also threatened with arrest.

The protests have laid bare the pain that generations of racial inequality has inflicted on black Americans and people of color in the United States.

"They feel hopeless and helpless and many police officers and other members of society don't understand that," he added.

The protests are also coming amid the coronavirus pandemic which has seen tens of millions of people in US lose their jobs and which has disproportionately affected black people, highlighting discrepancies in health care treatment.