US hands over Bagram military prison to Afghanistan

The US military has handed over to the Afghan government the only detention facility in the country that had been under American control. The transfer comes a year after the two sides first agreed on the handover. 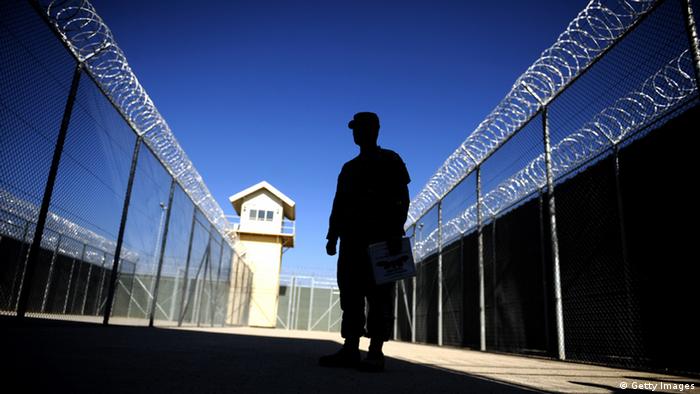 Afghanistan on Monday took full control of the Parwan Detention Facility, part of the Bagram military base, from the United States.

The handover ends a bitter chapter in American relations with Afghanistan's President Hamid Karzai, who had demanded control of the prison as a matter of national sovereignty.

Top US commander in Afghanistan, General Joseph Dunford, handed over the prison, located north of Kabul, at a ceremony after signing an agreement with Afghan Defense Minister Bismullah Khan Mohammadi.

"The transfer of the detention facility is an important part of the overall transition of security lead to Afghan National Security Forces. This ceremony highlights an increasingly confident, capable, and sovereign Afghanistan," Dunford said.

President Karzai's government aims at bolstering the peace process by releasing suspected Taliban fighters from prison. Experts, however, doubt this will lead to any kind of peace. (10.01.2013)

The US was supposed to fully hand over the facility last September after signing an agreement to do so a year ago. However, the transfer was held up pending a final deal between the US and the Afghans over the release of certain prisoners.

US Secretary of Defense Chuck Hagel refused to finalize the agreement without a guarantee from President Karzai that his government would not release prisoners considered dangerous by the US.

Karzai had said Bagram's detainees were “innocent,” leading US officials to worry that he would release prisoners who would return fighting in the country's insurgency.

The spat caused embarrassment to the US defense secretary, who had only recently assumed the post.

However, Hagel was able to strike a deal with Karzai on Saturday who agreed not to release prisoners considered dangerous.

A transfer of authority

In September, Afghanistan assumed control over some 3,000 prisoners there, though the US maintained authority of several hundred inmates and final veto power over any releases. It was unclear whether the US would retain veto power under the terms of the new agreement.

The transfer of the prison comes ahead of the 2014 withdrawal of the majority of NATO's 96,000 troops currently serving in Afghanistan as US-led forces wind down more than a decade of war.

Bagram prison was once compared to Guantanamo Bay because some inmates were detained without trial or knowledge of any charges. Abuse and torture allegations have also marred the prisons' record.

President Karzai is due to step down after an election next year, 13 years after he came to power with the support of the US. This followed the ousting of the Taliban regime in a US-led invasion of Afghanistan in the aftermath of the September 11 attacks of 2001.

Meanwhile, US Secretary of State John Kerry paid an unannounced visit to Afghanistan on Monday for talks with President Karzai, local media reported. The US embassy did not immediately announce his program.