As the election nears, President Obama and Governor Romney have tried to draw clear distinctions between their foreign policies. But the next president will face hard realities that leave little room for maneuver. 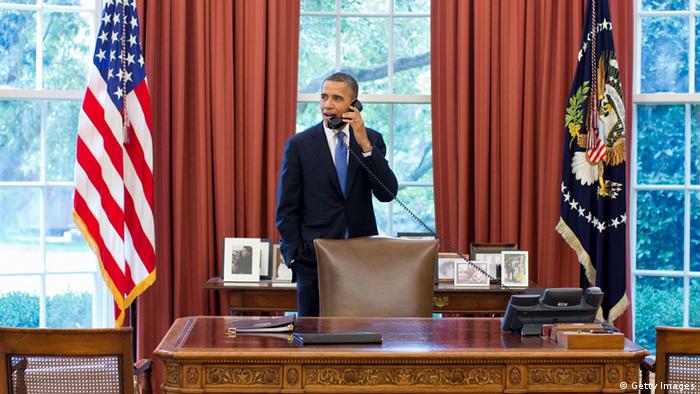 Throughout the campaign season, former Massachusetts governor Mitt Romney has sought to present an alternative vision to President Barack Obama's foreign policy, saying that he will lead the US into another "American Century" by acting with "clarity and resolve" on the world stage.

Romney's rhetoric plays to an electorate that still views the United States as the most important country in the world, but one whose influence is ebbing after 10 years of war and the worst financial crisis since the Great Depression. Just 24 percent of Americans believe their country plays "a more important" role as world leader compared to a decade ago, according to a September 2012 study by the Chicago Council on Global Affairs.

"When Obama was elected there was a recognition that the American people felt we were overcommitted in a number of places, and you've seen obviously the decision to get out of Iraq as the most obvious manifestation of that," Stephen Walt, an American foreign policy expert at Harvard's Kennedy School of Government, told DW. "Even when Obama decided he was going to escalate in Afghanistan he put a deadline on it."

An overextended America has begun to engage the world more cautiously. During the Libyan civil war in May 2011, an unnamed Obama administration aide told the New Yorker magazine that the president "was leading from behind." In other words, President Obama sought to create the political and material conditions for the NATO allies to stop Moammar Gadhafi's military advance against the Libyan uprising, without making Washington the public face of the intervention force. 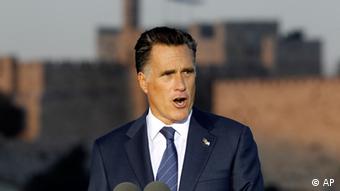 During his trip to Israel, Romney promised to be tougher on Iran and to stand up for the Jewish State

The phrase was a lightening-rod for many conservatives, who balked at the idea of the United States taking a back seat to any nation or organization when it came to foreign affairs. During the Republican National Convention in Tampa, Florida last August, former secretary of state Condoleezza Rice told a cheering audience that "we do not have a choice, we cannot be reluctant to lead, and you cannot lead from behind."

"Romney tends to adopt a more triumphalist tone," Walt said. "He certainly has emphasized his commitment to what most people would call American exceptionalism, that the United States is a different country with different responsibilities, (and a) different set of values than the rest of the world."

'The threat from within'

But the ability of an America gripped by economic turmoil to maneuver in an unpredictable world torn by revolution and war is limited, according to Josef Braml, a US foreign policy expert with the German Council on Foreign Relations.

"If Romney were elected he would also have to face realities," Braml told DW. "Now, talk is cheap. If he were elected president, he would have to put his money where his mouth is, and he would realize he would be confronted with the same realities."

Those realities are the economic and social dislocations that are currently polarizing America, according to Braml. He argues that the level of deficit spending by both private households and the government has reached an unsustainable level. And the economic stimulus and extension of the Bush-era taxes cuts are reaching the limits of their effectiveness. At the same time, the federal government has been gridlocked by a stand off between the Democrat-controlled presidency and Republican-dominated House of Representatives. 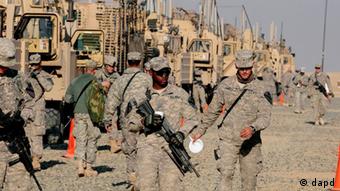 "The biggest threat to America is not an external threat, but its internal weakness," Braml said. "When you look at the national security assessment you get the same sense. I'm not predicting another superpower crumbling from within, but we should be very careful. The threat from within is very important and that also limits the room to maneuver on other issues."

'Politics stops at the water's edge'

These internal weaknesses - slow economic growth and high unemployment - have been the primary focus of the presidential campaign, and the area where the real differences between the two candidates lie, from regulation and tax policy to health care. But as Republican Senator Arthur Vandenberg said in 1947 as the Cold War was escalating, in American foreign policy, "politics stops at the water's edge." Even in America's current highly polarized domestic atmosphere, the dictum more often than not rings true.

"Both Republicans and Democrats are committed to American leadership in the world; they're committed to the US remaining the most powerful military country," Walt said. "They're convinced that the US has to be involved in addressing most international problems. Nobody here is talking about retrenchment in a serious way or isolation."

Although President Obama was characterized as a progressive by both poles of the political spectrum in the 2008 election, he has not governed as one in America's foreign relations. The Nobel Peace Prize recipient has surged American forces in Afghanistan, ramped up the campaign of drone strikes in Yemen and Pakistan, and sought to impose tougher sanctions against Iran.

"The central problem is that Obama has in fact run a rather centrist, you could even argue a center-right, foreign policy," Walt said. "It has not been a leftist foreign policy at all. And that has left Romney with hardly any issues that he can push."

Republican candidate Mitt Romney is hoping for a presidential boost with a six-day international trip. But he's only visiting three countries - and so far, he's only been dealing in rhetoric. (26.07.2012)