The computer system used by US customs officials at airports nationwide has crashed, leaving thousands of passengers lining up to enter the country. Disruptions were reported for around three hours at several airports. 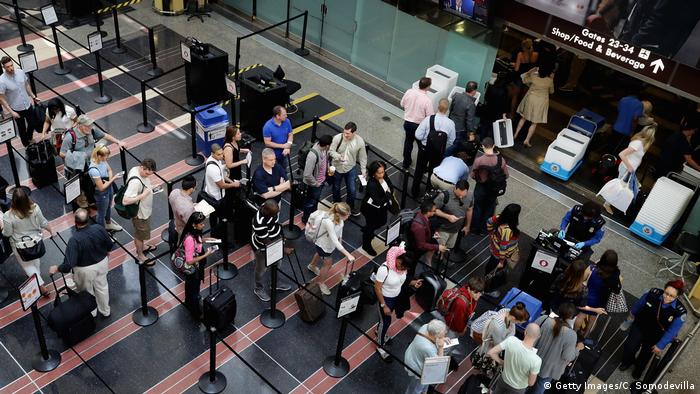 The on-line booking code for flight reservations has just six numbers and letters. Experts are now warning that hackers can easily crack the code, and re-book the flight. (27.12.2016)

US carrier Delta Air has lifted a worldwide grounding of its flights, with some planes now taking off. The grounding was caused by a computer breakdown following a power outage. (08.08.2016)

Counterfeiters often sell their goods at lowers price than the original, closing off competition and leading to losses for authentic manufacturers. (15.02.2016)

The computer system used by US customs officials at airports nationwide has crashed, according to a statement from the US Customs and Border Protection (CBP) on Monday evening.

It said customs officers at several airports were attempting to process international passengers using "alternative procedures" until the system came back online.

An official from Miami International Airport told broadcaster NBC that passengers on "more than 30 international flights were affected."

Los Angeles International Airport said on its Twitter feed that it was also experiencing problems.

Within a few minutes of the disruption, passengers took to social media in anger. Several people posted photos of long lines.

"People are starting to argue and get frustrated," Cali Rez tweeted in Miami. "Get someone down here to explain things and direct the lines ASAP."

Radio show host Kristin Klingshirn, who flew into Atlanta, tweeted that she'd been told her plane was 20th in line for a gate.

CBP officials were working to establish the cause of the outage, officials said.

Fort Lauderdale International Airport tweeted a few hours later that the system was being slowly restored but there were still delays.