New York City and Chicago joined other major US cities in ending curfews as peaceful protests continued on the streets. Officials in several US cities said they would overhaul their police and public safety departments. 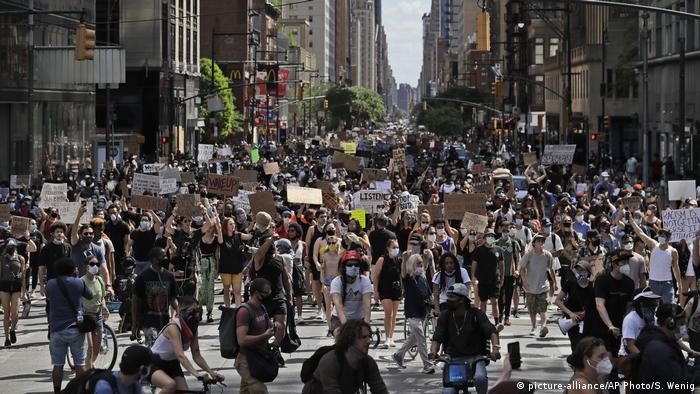 New York City and Chicago lifted curfews on Sunday, following a weekend of protests against racism and police brutality. The move came as several city governments are seeking to defuse tensions and have responded to protesters' demands by promising reform.

"I made the decision to end the curfew. And honestly, I hope it's the last time we will ever need a curfew in New York City," Mayor Bill de Blasio said.

Floyd, an unarmed black man in handcuffs, died May 25 after a white officer pressed his knee into his neck, ignoring his "I can't breathe" cries and holding it there even after Floyd stopped moving. His death sparked protests that spread around the world.

The curfew was New York's first in decades and by Friday, it had drawn criticism from local leaders and activists, who said it caused needless confrontation between protesters and police.

Chicago Mayor Lori Lightfoot also lifted the city's curfew on Sunday and announced the reopening of downtown train stations, in addition to resuming full bus services. The city had been off-limits and under curfew since May 30.

Chicago and New York followed the lead of other major cities like Los Angeles, Atlanta and Washington, DC., which ended curfews on Saturday, ahead of the weekend's planned protests, as an overture to protesters, betting that the decision would make the demonstrations more peaceful.

Calls to 'defund the police'

Activists and protesters have rallied behind calls to "defund the police," a criticism of what they see as a pattern of pouring more resources on police departments than on other city services, including housing and education.

Minneapolis-based police reform group MPD150 described the slogan as "strategically reallocating resources, funding, and responsibility away from police and toward community-based models of safety, support, and prevention."

Defunding the police has picked up support among Democratic lawmakers. Alexandria Ocasio Cortez, a member of the US House of Representatives, called for the reduction of New York City's police department, which she said was worth $6 billion.

In Minneapolis, where George Floyd was killed and the epicenter of the protest movement, nine of the city's 13 council members have said they favor defunding and dismantling the police department.

Council President Lisa Bender told CNN that the city council would move to discuss how to replace the current police department, saying that its funding would be shifted to other city needs.

"Our commitment is to end our city's toxic relationship with the Minneapolis Police Department, to end policing as we know it and to recreate systems of public safety that actually keep us safe," Bender said at a rally Sunday afternoon, ABC News reported.

Los Angeles Mayor Eric Garcetti has promised to work with state leaders to "advance legislation that protects Black lives and communities of color." He announced on Sunday the departure of California National Guard units from the city.

New York Mayor de Blasio also pledged to make his city "more just." He proposed that a section of the police budget would be redistributed to youth and social work, while disciplinary files of police officers would also be made more transparent.

De Blasio said the proposed reforms marked only the first steps and that further details would still need to be worked out. "You will see more change. I promise you that," he tweeted.

White Americans and white Europeans need to reflect on their own lives and actions, to educate themselves. And ultimately, they have to figure out how they are going to show up and fight racism, writes DW's Sam Baker. (06.06.2020)

Protesters in the UK have pulled down a statue of a slave trader during a demonstration in honor of George Floyd. Since Black Live Matter protests began, controversial statues have come down in cities around the globe. (07.06.2020)

Political protest is proving challenging during the coronavirus pandemic, but activists against racism and the climate crisis are coming up with creative solutions. (06.06.2020)