US charges nine Iranians for hacking attacks on universities

Hackers allegedly worked with the Islamic Revolutionary Guard Corps to steal 31 terabytes of academic data and intellectual property. But the group is unlikely to face a US court. 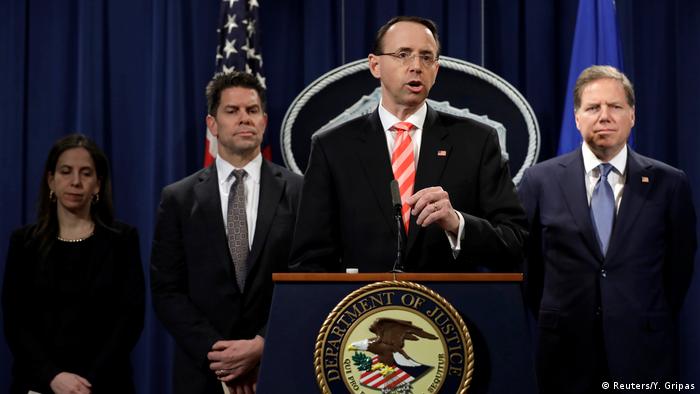 The US government on Friday announced charges and sanctions against a group of Iranians accused of running a massive hacking operation against universities, businesses and government agencies.

Nine Iranians were charged with working with Tehran's security forces to hack into about 320 universities worldwide to steal 31 terabytes of academic data and intellectual property in a series of attacks beginning in 2013.

The US Justice Department also accused the group of hacking dozens of government organizations, such as the Department of Labor and the Federal Energy Regulatory Commission, as well as law firms and biotechnology corporations.

The Trump administration placed sanctions on the nine men and one other Iranian man who was charged with a separate hacking attack.

Read more: Criminals hack their way to the top

The men are all believed to be in Iran and are unlikely to face court given the lack of an extradition treaty between the two countries, but the US said the men would still be impacted by the charges.

"People travel. They take vacations, they make plans with their families," FBI Deputy Director David Bowdich said. "Having your name, face and description on a 'wanted' poster makes moving freely much more difficult."

The attacks were allegedly carried out through the Mabna Institute at the behest of the Islamic Revolutionary Guard Corps, the elite military force assigned to defend the country from internal and external threats.

More than 100,000 professors worldwide were allegedly targeted in spearphishing email attacks, which compromised about 8,000 of them.

"By bringing these criminal charges, we reinforce the norm that most of the civilized world accepts: nation-states should not steal intellectual property for the purpose of giving domestic industries an advantage," Deputy Attorney General Rod Rosenstein said.

The White House has made a concerted effort to increase pressure on foreign governments behind malicious hacks. The US has also threatened China with $60 billion (€49 billion) of tariffs on products it says are based on US intellectual property.

The new charges came just one day after John Bolton was named as new national security adviser. Bolton is deeply skeptical of the 2015 nuclear deal with Iran.