NATO's use of depleted uranium in bullets and armor in the Kosovo War is suspected by many to be a reason for high rates of leukemia in the region today. The long term effects on the environment also remain unclear. 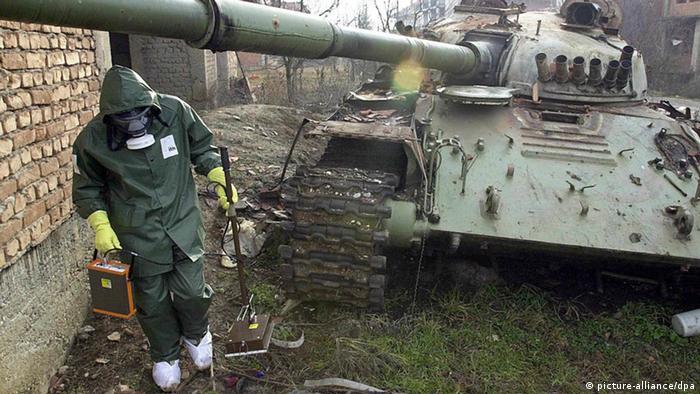 The US diplomat Richard Holbrooke once called the road between Kijevo and Klina one of the most dangerous roads in Europe. It was here that some of the worst fighting in Kosovo during the late 1990s took place.

Back then, Kosovo Albanian rebels were in a fierce struggle with Serbian security forces. Their aim was to free Kosovo from Serbia and Slobodan Milosevic's regime. In 1999, NATO intervened with its warplanes.

In Klina, NATO warplanes caused a lot of damage. Today, the buildings are new, albeit a little run down, and its cafes are full. But, residents like Halil Gashi remember darker days. 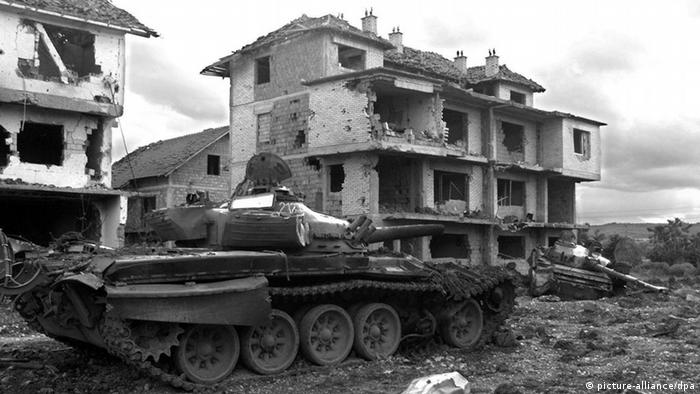 “This is where the bus station used to be. They bombed it — they destroyed it completely,” the 77 year-old explains, as he walks past Klina's police station.

Yugoslav Army tanks were stationed across Klina. But the tanks and the bus station were no match for NATO warplanes. They included American A-10s. The hulking attack plane is nicknamed “The Warthog.” It is built around an enormous Gatling gun which fires 30mm bullets with depleted uranium cores. They're designed to tear apart tanks.

A store across the street still bears pock-marks from the explosions. As it starts to rain, a police officer shows where some of those rounds hit.

Officers at the Klina police station didn't want to be identified by DW. But they did confirm that the police station was built here four years ago. They said the war damage was covered over, instead of being cleaned up properly. The officers said they're worried about their health because of depleted uranium that was used here. “Thank god someone cares,” one said to DW's reporter. 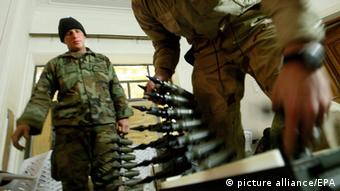 Uranium depleted bullets were used by NATO in Kosovo

Police say customs officials detected higher levels of ground radiation here. Their claims were impossible to verify, but Italian peacekeepers did visit the site with radiation detectors in 2001 and there were no reports of anything being found. Neighbor Halil Gashi is convinced that the site is safe. “I don't think there's any danger. Workers came and they cleaned it up,” he said.

In 2001, French politician Bernard Kouchner appeared before reporters here at the wrecked bus station. A physician who founded Doctors Without Borders, Kouchner was Kosovo's UN overseer. “I think there is no real risk," he said, responding to reports at the time that depleted uranium was behind a reported spike in leukemia cases among peacekeepers who served in Kosovo.

NATO fired some 30,000 rounds of depleted uranium munitions in Kosovo. The alliance still maintains a peacekeeping force here called KFOR. But it no longer actively monitors the sites where depleted uranium was fired.

Lt. Col Alexander Willing, a KFOR spokesman, declined to be interviewed on tape by DW saying that he didn’t want to draw attention to something that poses no danger. In an email, Willing cited the findings of a NATO committee in 2001. “NATO’s use of DU in the Kosovo conflict did not cause any continuing health risk and therefore no further action was required on our part,” he wrote. 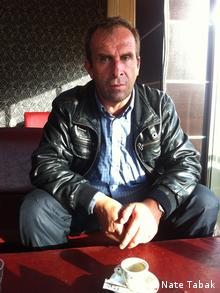 In 2000, a UN team visited 12 percent of the sites where NATO had reported firing the munitions. A report issued the next year found that there wasn’t widespread contamination in the ground or water.

But, the report also didn't exclude dangers in the future, and recommended further monitoring, especially of water supplies. The report noted that the depleted uranium bullets can penetrate as far as seven meters and sometimes shatter. Some bullets struck areas near groundwater wells that were as shallow as two meters. The report noted that uranium rusts rapidly when in contact with water and oxygen. The rust — or oxidized uranium — can dissolve into the water, contaminating it.

Taxi driver Nazmi Zogaj was living in Germany when the war broke out. “I came back from Germany to fight. But we couldn't do much because we were so small”, Zogaj told DW.

Zogaj is in his mid-40s, with a face that bears the wrinkles of a man much older. He fought with the Kosovo Liberation Army, the largest Kosovo Albanian rebel force during the war. But it was NATO's planes that proved decisive, and led Slobodan Milosevic to withdraw his forces.

Zogaj is grateful to NATO, but says he knew at the time that there would be repercussions after the war.

“There are many cases of leukemia and so on,” Zogaj says. “A lot of people are getting sick. I think it's a combination of factors. People are traumatized by the war, but it's also caused by the weapons used.”

Since the war, media reports in Kosovo and Serbia have suggested higher rates of leukemia in areas where depleted uranium was used. Dr. Merita Berisha, who works in Kosovo's Institute of Public Health, told DW that the country's health authorities haven't studied the issue because there isn't any reliable data. Kosovo only established a national cancer database this year.

To date, there has yet to be a widely accepted study proving a link between depleted uranium and diseases. But, the World Health Organization considers it a potential hazard.

Shyqri Dumani has been dealing with radiation in Kosovo for the last 35 years. He's the head researcher of the government's Radiation Protection Service in Obilic.

Today, Dumani's going down memory lane. He wears a slight grin as he uses a Geiger counter. He's checking the radiation levels on old filters collected in Kosovo shortly after the Chernobyl disaster in 1986 in the Ukraine. “The entire territory of Kosovo was contaminated,” Dumani says. 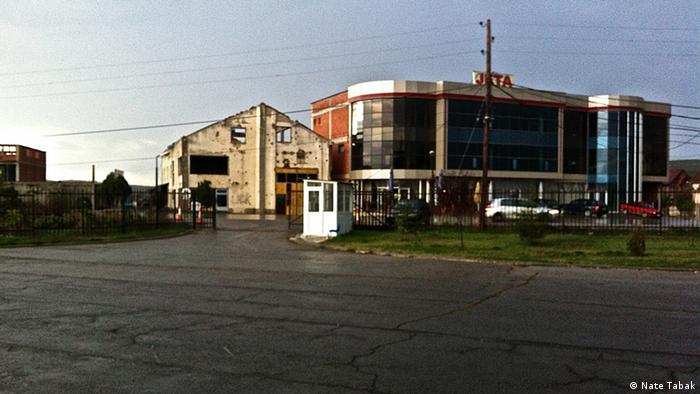 Klina's police station is brand new, but the building next door tells a different story

He says, in comparison, the potential risks posed by depleted uranium munitions from the 1999 war are significantly less. But, he says, no one knows for sure because Kosovo authorities haven't followed up on the 2001 UN report.

“Since 12 years have passed since the war, the depleted uranium in these places has been dispersed by nature”, Dumani explains. “We can't say what the effect is on humans, but it's basically been minimized.”

While Dumani doesn't think depleted uranium is a big danger to Kosovo, he says the matter still deserves attention. Over the years, he says his agency has sought to inspect sites without getting co-operation from the government. “We can say that the government is very passive on this issue.”

When asked about the officers' concerns at the police station in Klina, at the former site of the bombed out bus station, Dumani says he wouldn't want to speculate on whether the officers are in any danger. But, he does admit that he wishes the Radiation Protection Service could have tested the land before the station was built.

Military veterans often struggle with war-zone memories long after their return from conflict areas. At the Gardening Leave project, former soldiers plant vegetables and tend to the flowers as they recover from war. (05.11.2012)

Clinton and Ashton urge Kosovo to continue talks with Serbia

US Secretary of State Hillary Clinton and EU foreign policy chief Catherine Ashton urged leaders in Kosovo Wednesday to make progress in talks with Serbia. The visit is part of a five-nation tour of the Balkans region. (31.10.2012)