Unveiling the history of the headscarf | Culture | Arts, music and lifestyle reporting from Germany | DW | 17.10.2018

Unveiling the history of the headscarf

A headscarf is often associated today with the head coverings worn by Muslim women. But an exhibition at Vienna's Weltmuseum shows the many — and sometimes contradictory — meanings the headscarf has embodied over time.

It's a piece of fabric that is laden with meaning: the headscarf. And over its 4,000-year-old history spanning the globe, it has taken on, lost and represented meanings that are as diverse — and sometimes even as contradictory — as the manifestations of the head-covering cloth itself.

Photographs, drawings, videos and high fashion designs are just some of the items that make up the show's 17 independent positions on the headscarf. 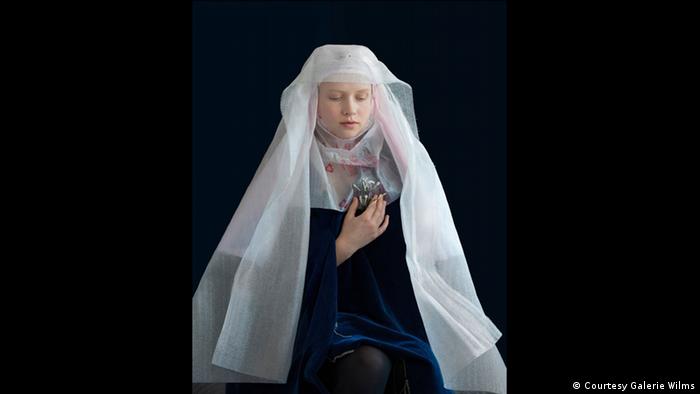 An idea born of current events

While the exhibition covers millennia, it was a series of social and political events last October that triggered the idea for the show, curator Axel Steinmann told DW. He highlighted a pharmacy's advertisement featuring a woman with a headscarf, the introduction of hijab-wearing emojis, and Saudi Arabia's decision to grant citizenship to a "female" robot that — unlike the country's female inhabitants — must not cover its head in public.

In this context, Steinmann said, it is important to realize that the headscarf has been influenced by its political and moral surroundings throughout history, both in the East and in the West.

"The goal of the exhibition is to reveal the transformations that the headscarf has undergone and that have been forgotten, repressed or those that are simply unknown," Steinmann said.

The exhibition's photographs alone show everything from traditional Christian veils to elaborate haute couture head coverings to abstracted head wraps. And while one drawing shows a wide-eyed young woman in a prize-winning stylish summer outfit complete with knotted headscarf, another sketch from Tehran depicts a fully-veiled woman, her face hidden, turning out a slim ankle in high heels. Overlaps and contrasts abound across the exhibition's items. 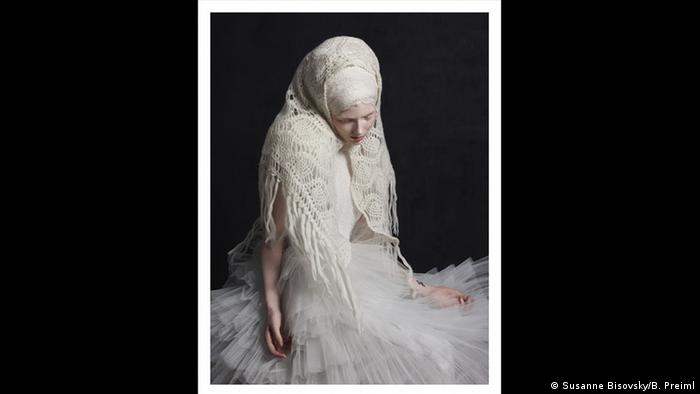 One object, a plurality of meanings

Today, the headscarf is often at the center of polemical debates in the Western world that focus on the various head coverings worn by some Muslim women. Yet the practice of covering one's head has been an integral part of all Abrahamic religions — Judaism, Christianity and Islam — and its roots go back even thousands more years to ancient Mesopotamian civilizations.

The exhibition doesn't present the headscarf as a clothing object that is always one of choice, and it doesn't shy away from contemporary controversies over head coverings in Islam, acknowledging in its description that "some Muslim girls and young women are forced to veil themselves" in public.

The show also acknowledges the fact that in general, a headscarf "far too often … still represents a man's word on a woman's body." Yet curator Steinmann highlighted that a headscarf cannot only be seen as a religious expression of female subordination to men.

By placing these perspectives side-by-side with those where the headscarf is a sign of Christian piousness or female emancipation or even high style, "Veiled and Unveiled" shows how head coverings are anything but the exclusive domain of one religion or culture or worldview. 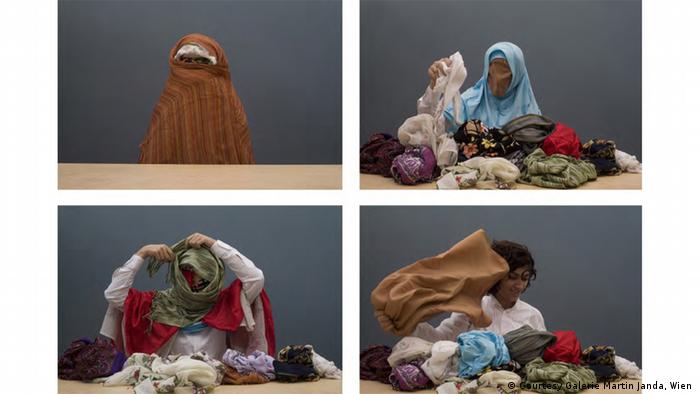 The Weltmuseum's show includes exhibits from North Africa, Southwest and Central Asia, Guatemala and Indonesia, though Steinmann points out that even this geographic range can't comprehensively capture the headscarf as a topic.

The exhibition also highlights headscarves worn by men. "For me, it was important to show that head coverings for men (turbans, yarmulkes, etc.) were also determined by historic and cultural-religious aspects in combination with rules of dress."

As is the case for women, religious prescriptions sometimes call on men to cover their head before God, such as in the Talmud, a central text in Judaism. But men also donned head coverings as fashion statements. The 18th-century trend of men posing for portraits with turbans was "a transcultural masquerade of staged masculinity," Steinmann said.

The exhibition's crisscrossing across gender, geography and era raises the question: Are headscarves a universal accessory then? The answer is not that straight-forward, Steinmann said.

"But the head, just like the body, has been decorated or covered in all cultures throughout all time."

Style-conscious Muslim women were long ignored by the mainstream fashion industry. An exhibition at San Francisco's de Young Museum confronts stereotypes on Islam and style, showing that Muslim fashion is far from drab. (22.09.2018)

The American company has become the first major maker of sporting apparel to offer a performance head covering for Muslim women who choose to cover. While some have celebrated the release, others see it as a market grab. (09.03.2017)

Through historic photos, haute couture designs, videos, drawings and more, an exhibition at Vienna's Weltmuseum focuses on the headscarf and its many meanings across history, religion and geography. (17.10.2018)