The American company has become the first major maker of sporting apparel to offer a performance head covering for Muslim women who choose to cover. While some have celebrated the release, others see it as a market grab. 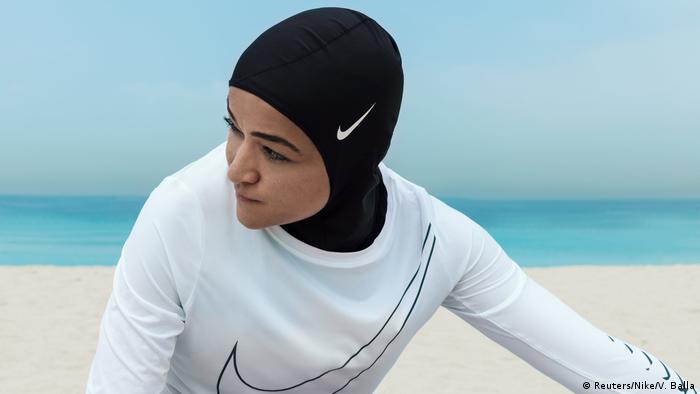 Many Muslim women athletes will now be able to sport a swoosh - on their heads. Nike hopes to make the "Pro Hijab" available for purchase in early 2018, the Oregon sporting giant said in a statement on Wednesday launching their sporting version of the Muslim headscarf, the hijab. 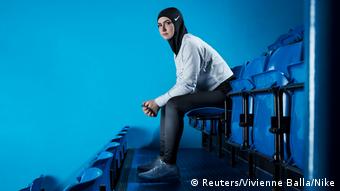 The Nike Pro Hijab is made of elite performance materials

Developed in combination with elite Muslim athletes, including UAE figure skater Zahra Lari and Olympic weightlifter Amna Al Haddad, the "Pro Hijab" is designed to address issues faced by many athletes cover their heads: sweat-absorbing materials like cotton that chafe and weigh down as well as problems of adjusting and securing the Islamic garment in place.

Like other performance gear from Nike, the "Pro Hijab" is made of a flexible, breathable material that wicks away sweat. It also features an adjustable elastic band to accommodate the varying needs of different athletic disciplines and keep the garment in place under other sports equipment, such as fencing masks.

Choosing to cover one's self, a visible manifestation of religious observation for many Muslim women, has become a controversial topic in the past few years as geopolitical events have inflamed fears of extremism tied to Islam. 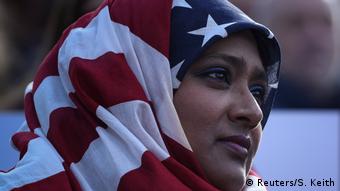 While some see hijab as a sign of modesty, others view it as a sign of empowerment, and yet others still as a marker of oppression. For instance, after the commercial release of the so-called burkini, French politicians banned the full-body swimsuit in summer 2016 saying it symbolized female enslavement.

Nike-sponsored Amna Al Haddad praised Nike for throwing a spotlight on powerful female Muslim athletes. In an email interview with DW, she described the apparel-maker as an "innovation company" that prioritizes athletes.

"Nike truly cares to cater for all kind of athletes and their needs - as such Nike took notice of the rising number of covered Muslim athletes through stories like mine and many others," she said.

But criticism of the "Pro Hijab" has come from members of Muslim communities as well, with some viewing it as a marketing gimmick.

In an interview with DW, Aaisha Dadi Patel, a journalist at Daily Vox in South Africa, said Nike's hijab launch was "pure capitalism."

"I'm really not a fan of the product or the hype around it," Patel said. "Nike are using their supposed support for Muslim women as a marketing tool."

As an active Muslim woman, Patel said she has been swimming and hiking whilst keeping her hair covered for years.

"Nike's hijab is nothing new. Products like this have been available for years and I've never had to compromise by exercise," she told DW. "We shouldn't be giving Nike all the credit. This isn't revolutionary."

In 2016, Danish company Hummel designed football jerseys for Afghanistan's women's team incorporating a built-in hijab. The Netherlands-based Capsters, who bills itself as the "world leading brand in sport hijabs," meanwhile offers a full line-up of head coverings for land and water sports.

With the company's release, Nike is tapping into a major market: the State of the Global Islamic Economy report 2015/2016, penned by Thomson Reuters, valued Muslim consumer spending across travel and lifestyle sectors at $1.8 trillion (1.7 trillion euros) in 2014 - a number which is expected to rise to $2.6 trillion (2.45 trillion euros) in the next three years.

Haddad admitted the "concept of a sport Hijab is not entirely new as many have campaigned in the past, and there are other options in the market."

Still, she sees the release as an important step forward, both for Islamic performance sporting wear and for global awareness on dress as an individual choice for Muslim women."

"Whether a Muslim woman wears or doesn't wear a hijab, it's her choice." Haddad said. "It is great to see that now there is more awareness about Muslim female athletes across the world and our role in sports, as sports truly brings people together despite differences.

The Royal Canadian Mounted Police is letting its women wear the hijab as a part of their uniform. The decision comes as several towns in France banned Muslim women from wearing the Burkini on their beaches. (25.08.2016)