On a cold and wet night in Dortmund, an unlikely group of players delivered half a performance for Germany. Head coach Joachim Löw will have been both warmed and chilled by what he saw in the 2-2 draw. 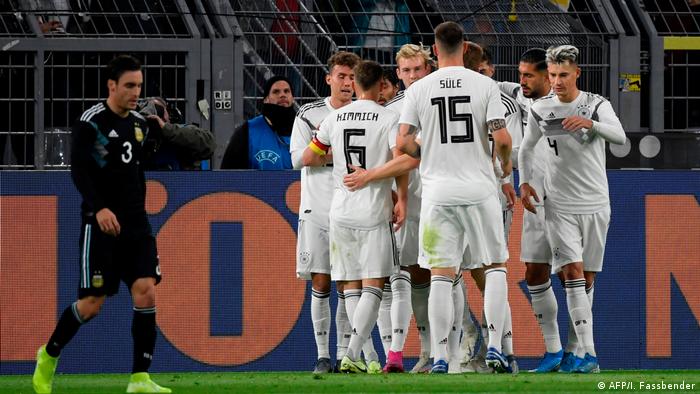 Despite the rain, the cooler temperatures and the shockingly low attendance at Signal Iduna Park, Germany found 60 minutes of the sort of committed performance that Julian Brandt said could be expected of the national team pre-match. Sadly the other 30 odd minutes were entirely passive, as Germany surrendered a two-goal lead.

Against an Argentina side who only came alive after scoring their first, Germany looked to have discovered the kind of fluidity Joachim Löw wanted from his charges. Ahead of Wednesday's game, the coach claimed 2019 hadn't gone as desired because his new core of players hadn't had the chance to develop together. On a night when large parts of this international friendly matched the drab weather, Löw will have been warmed by the performance of some individuals and the combination play of the collective, but also chilled by the way his team crumbled.

On the hour mark, things looked so promising for this somewhat thrown-together group of players. That Serge Gnabry is now Germany’s most important and dynamic player is not news, but that he continues to be so is notable. His confidence in front of goal helped him steal in for the first, and his pace allowed him to assist the second. Friendly or not, Gnabry is Germany’s No. 1 attacker.

Chance to shine for new boys

The 23-year-old forward man took his chance a while ago. Against Argentina, it quickly became clear that for other, newer and even largely unknown faces this was their time to show they belonged.

Emre Can, playing in a back five next to Freiburg’s Robin Koch (a late addition to the starting lineup after Niklas Stark was ruled out with a stomach bug), was aggressive and combative in a way that Germany needed.

"I always try to be aggressive when I play football, that's my way of playing. I just try to help the team no matter where I play," Can said afterwards. As for his role in defense, he said with a smile: "I'm not sure, but I think we didn't have enough players. The coach came to me yesterday and told me I was going to play in defense, and I'm okay with that because I've played there a few times in the past."

Alongside him, Kai Havertz finally got a start. The Leverkusen man might not have delivered a lights-out performance, but he sparked enough to show that he can be the playmaker the new Germany team need. With Can playing deeper than expected, Havertz and Kimmich proved an effective alternative midfield pairing in the absence of Toni Kroos. 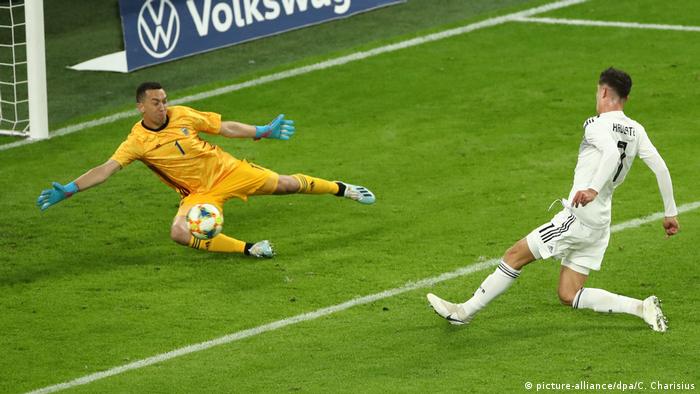 Koch was largely solid, but when he was caught out by Lucas Alario for Argentina's first goal, the momentum of the game began to swing. Brandt looked preoccupied despite finally playing next to best friend Havertz and was hooked soon after the hour mark. Nadiem Amiri replaced him and Suat Serdar also came on as both made their debuts, but Germany couldn’t wrestle back control. Serdar’s costly loss of possession in midfield allowed Argentina to eventually capitalize.

With a near half-empty stadium (just over 45,000 attended) and an atmosphere so quiet the players' voices could often be heard, it felt like a training game.

Talking points to feed the Manuel Neuer or Marc-Andre ter Stegen debate were hard to find. The Barcelona keeper wasn’t at fault for Alario's header, made a strong save in the air shortly afterwards and his distribution was largely excellent. He will no doubt be frustrated to have been beaten at the near post for the deflected equalizer, though.

When and if Löw watches this back, he will be happy with parts of the performance. The strong displays from Gnabry, Can, Kimmich and Havertz will not have been a surprise, but good news all the same. He'll be happy that this group of players strung together a few moments of dynamism and defensive composure.

He will also, however, be pretty frustrated that this team made life so easy for an Argentina team that were truly uninspiring for large passages of play.

"We didn't move well after 60 minutes or keep the ball. Of course if you're 2-0 up and then it's 2-2 in the end it's difficult to say you're happy but we can take a lot from the first half," Can rightly pointed out.

This wasn’t a qualifier and the group put out on the pitch was cobbled together, but Germany’s inability to finish teams off remains a glaring issue.

A young Germany side without any of its 2014 World Cup winners faded after a strong first half to draw 2-2 with Argentina. Serge Gnabry and Kai Havertz were on the scoresheet but who impressed and who struggled? (09.10.2019)

Bastian Schweinsteiger has won almost everything, changing German football and himself along the way. As he announces his retirement, DW looks back at one of Germany's finest, most enduring and best-loved footballers. (08.10.2019)