UNICEF: one in nine children live in conflict zones

Some 250 million children around the globe live in conflict zones, the UN's children agency has said. UNICEF has launched an appeal for nearly $3 billion for those at the greatest risk. 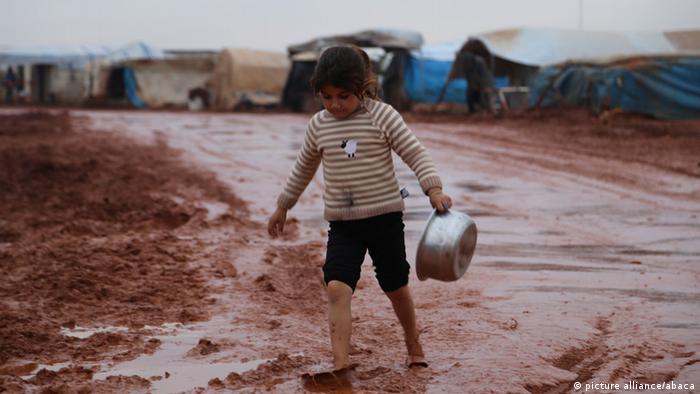 Conflict and severe weather are forcing tens of millions of children from their homes and subjecting them to food shortages, violence, disease, abuse and lack of education, UNICEF said on Tuesday.

The UN's childrens agency is asking donors for $2.8 billion (2.6 billion euros) in 2016 to provide education and humanitarian aid to 43 million children at greatest risk, double the appeal from just three years ago.

In all, nearly 250 million children live in conflict zones, UNICEF said, noting that children in conflict zones are twice as likely to die from preventable diseases before the age of five than those in other countries.

The largest section of the appeal - $1.16 billion - would be used to help with the conflict in Syria, which has displaced nearly 14 million inside the country and forced 5 million refugees into neighboring countries.

For the first time, a full quarter of funds will be spent on education. UNICEF aims to almost the double the number of children it provides with academic aid, from 4.9 million at the beginning of last year to 8.2 million in 2016.

More than half of those children, or 5 million, would be Syrians inside the country or in neighboring countries.

"Millions of children are being robbed of their education," Afshan Khan, UNICEF's Director of Emergency Programs, said in a statement. "Education is a life-saving measure for children, providing them with the opportunity to learn and play, amidst the carnage of gunfire and grenades."

Without this education, UNICEF warned entire generations in conflict zones could be lost, with far reaching impacts on their lives, families and societies.

"Climate change is a growing threat, with over half a billion children living in extremely high flood occurrence zones and nearly 160 million living in high or extremely high drought severity zones," it said in a statement.

Other funding priorities include $30.3 million for the refugees and migrants fleeing to Europe, $25.5 million for Burundi, $188.9 million for Nigeria, Cameroon, Niger and Chad, as well as aid for protracted but underfunded conflicts in Afghanistan, the Democratic Republic of the Congo and Sudan.

As the destructive conflict in Yemen reaches its one year anniversary, UNICEF is also asking for $180 million for children there. Nearly 10 million children in Yemen require humanitarian aid.

In December, UN aid agencies issued a record appeal of $20.1 billion) to respond to a growing global unrest. Funding often falls short of targets, with only 49 percent of the appeal reached last year.