Germany's jobless rate dropped to 5.0 percent in June. The Federal Employment Agency said it's the lowest level ever recorded for the month since German unification in 1990, and a trend reversal is not in sight. 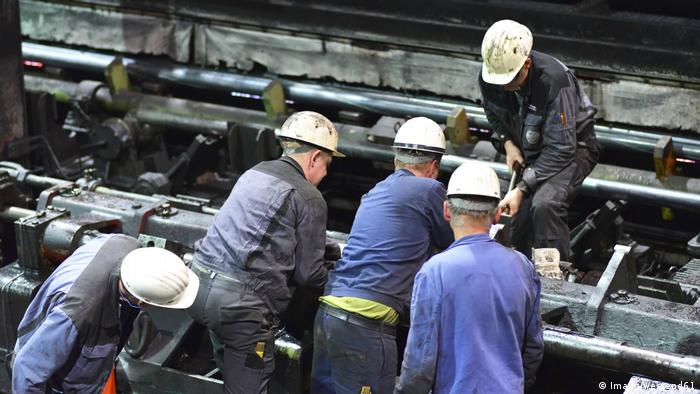 The number of people out of work in Germany in June fell to 2.276 million, the Federal Employment Agency (BA) announced Friday, saying the figure marked the lowest number for the month since the country united back in 1990.

The jobless number thus dropped by 40,000 month on month, with a total of 197,000 fewer people looking for work in a year-on-year comparison.

BA officials said the unemployment rate now stood at 5.0 percent, down from 5.1 percent in the previous month.

The Nuremberg-based agency registered 805,000 job vacancies for June — 74,000 more than in the same month a year earlier in unadjusted terms.

"The labor market continues to develop favorably," BA President Detlef Scheele said in a statement, adding that he expected the jobless rate to drop below the 5-percent threshold in fall.

Analysts noted that some negative indicators for the German economy such as the recent decline in orders and slowing growth would take a longer time to impact the domestic labor market and were not felt immediately.

Over the long term, economic scientists predict a rise in unemployment as uncertainties over the impact of Brexit and growing protectionism in global trade is expected to hit Germany as an export-oriented nation.

Members of Generation Z are facing record-high inflation rates for the first time in their lives, and those entering the job market are running into formidable hurdles. Will they fare better than their older peers?

The digital and automation revolution has accelerated during the coronavirus pandemic. Business leaders at the virtual World Economic Forum are grappling with what to do about the millions left jobless.

India is facing economic turmoil in the wake of the coronavirus pandemic, with many people out of work and prices rising. Economists say there is little sign of relief on the horizon.