Under cloud of chaos, Kosovo celebrates three years of independence | Europe| News and current affairs from around the continent | DW | 17.02.2011

Under cloud of chaos, Kosovo celebrates three years of independence

As Kosovo entered its fourth year of independence, citizens celebrated their hard-fought freedom from Serbia. But Kosovo's lack of government and a scandal surrounding the prime minister cast a shadow over the day. 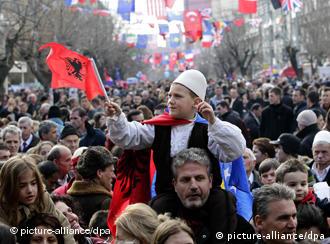 Kosovo's independence is only recognized by 75 countries

Crowds gathered Thursday in Pristina to celebrate the third anniversary of Kosovo's unilateral declaration of independence from Serbia.

Throngs packed the main thoroughfare, Mother Theresa Boulevard, in a patriotic fervor. A sea of Albanian, American and Kosovo flags brought color to the festivities, as a Roma band lent a soundtrack to the celebrations.

But while Kosovo's Albanian majority feted the anniversary, the fledgling Balkan state remains the subject of international scrutiny and internal political chaos.

Kosovo's Interim President Jakup Krasniqi praised the country for its strengths, but readily admitted it had a long way to go.

"During the three years of independence, Kosovo has created a democratic system and the institutions of statehood ... recording solid economic and social development," Krasniqi said in a televised address.

Krasniqi warned, however, that Kosovo had to address the "difficult tasks of strengthening [the country's] international identity and credibility." 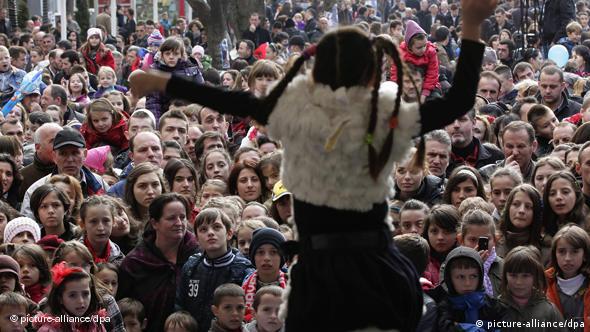 Crowds of people celebrated independence from Serbia in the capital, Pristina

Some 45 percent of Kosovo's population lives below the poverty line.

Things don't appear to be improving fast. The country's government fell this past November, and subsequent elections tainted by fraud and irregularities have yet to produce a new one.

A Council of Europe report has also put a cloud over Prime Minister Thaci, accusing him of overseeing a criminal enterprise that trafficked human organs during the liberation struggle.

Meanwhile, the country still lacks diplomatic support from a large portion of the globe; a mere 75 countries recognize Kosovo's statehood - since the Sultanate of Oman became the 75th just two weeks ago.

Those headwinds cast a heavy shadow over an otherwise happy day for Kosovo, according to political analyst Ardian Arifaj.

"Looking back they have something to celebrate, but looking forward it's true that they don't have much to celebrate," Arifaj told Deutsche Welle.

"We haven't had a government in place for a few months now, we don't have a budget for 2011, and we don't have institutions which have credibility and competence. And, what's worse, we don't have political leadership who will take this country forward," he said. 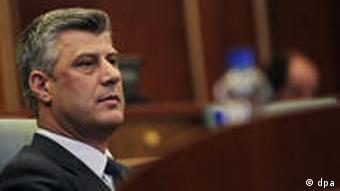 Thaci says he will form a government by next week

Still, Kosovans did receive some international recognition for their celebration. US Secretary of State Hillary Clinton sent her congratulations, saying Washington was "committed to your future and we are honored to be your friends and your partners."

The European Union's special representative to Kosovo, Pieter Feith, praised the country Thursday for "building democratic institutions which increasingly function effectively to ensure a Kosovo that is viable, sustainable, stable."

Kosovo's embattled leadership remains tenacious. Thaci has promised to have a new governing coalition ready to go in time for the parliament's new session next week.

But the expected choice for president, Behgjet Pacolli, has raised a few eyebrows. The multimillionaire has ties to Russia, which remains the most powerful opponent to Kosovo's worldwide recognition.

Serbia says the United Nations should look into allegations that Kosovo's prime minister was part of an organ trafficking network during the Kosovo War in the late 1990s. (17.02.2011)

Following the deaths of 15 people trying to escape from Kosovo into the European Union, the trial has started of eight men accused of being part of an international people smuggling crime ring. (09.02.2011)

Kosovo leaders have rejected accusations that they were involved with serious crimes during their country's struggle for liberation from Serbia. But Serbia is saying that the claims show the "true face of Kosovo." (16.12.2010)