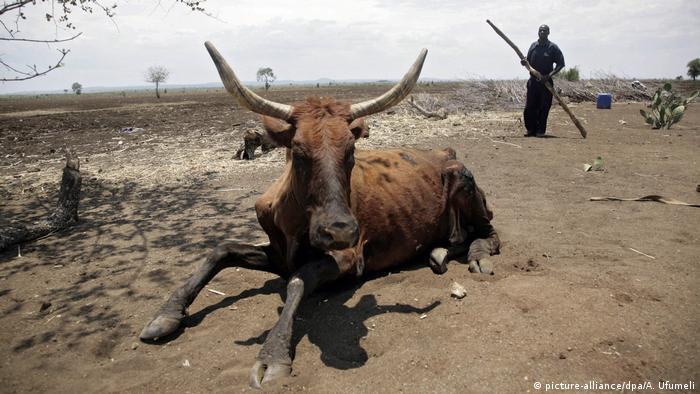 An unprecedented number of people in 16 countries across southern Africa are gravely food insecure as climate change wreaks havoc on the region, the UN's World Food Program (WFP) warned on Thursday.

"This hunger crisis is on a scale we've not seen before and the evidence shows it's going to get worse," the WFP's Regional Director for Southern Africa, Lola Castro, said in a statement.

The crisis is impacting 45 million people — many of whom are women and children. The region has been hit hard by repeated droughts, widespread flooding and economic hardship.

Eswatini, Lesotho, Madagascar, Malawi, Mozambique, Namibia, Zambia and Zimbabwe are among the hardest-hit.

Many families across the region are already skipping meals, taking children out of school and falling into debt to stave off agricultural losses, the WFP said.

The UN agency appealed to the international community for help, saying that it has so far only secured $205 million (€184 million) in funds out of the $489 million it requires to provide aid.

"The annual cyclone season has begun and we simply cannot afford a repeat of the devastation caused by last year's unprecedented storms," Castro said.

Mozambique, Zimbabwe and Malawi are still reeling from the widespread devastation caused by Cyclone Idai in 2019.

According to the UN, nearly half of Zimbabwe's 15 million inhabitants are living in a state of chronic food security.

An estimated 20% of the population are facing a food crisis in drought-hit Lesotho and Zambia, long considered the region's breadbasket.

The WFP said it plans to provide aid during the lean season to 8.3 million people facing crisis levels of hunger.

UN: 115 million people are on the brink of starvation worldwide

World efforts to lower hunger to zero by 2030 are being negated by warfare and climate change, warn nutritionists. Their latest global index categorizes 51 nations, mainly in Asia and Africa, where hunger is alarming. (11.10.2018)