UN Urges Western Nations to Do More For Fleeing Iraqis | Europe | News and current affairs from around the continent | DW | 17.04.2007

UN Urges Western Nations to Do More For Fleeing Iraqis

In a two-day conference on Iraqi refugees that began Tuesday in Geneva, the UN made an appeal to the US, Britain and other EU nations for more financial aid and less stringent asylum policies. 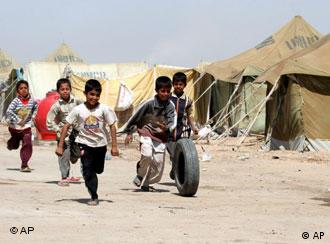 At a two-day UN conference in Geneva aimed at boosting help for some four million Iraqis who have fled their homes, the UN and international human rights groups urged Western nations to do more to avert a humanitarian crisis in Middle Eastern countries overwhelmed by tens of thousands of Iraqi refugees each month.

Some 50,000 Iraqis are forced to leave their homes each month, according to the UN Refugee Agency, UNHCR. Half of the country’s four million refugees are displaced within Iraq, while the other two million have found refuge elsewhere, mainly in neighboring Syria or Jordan. 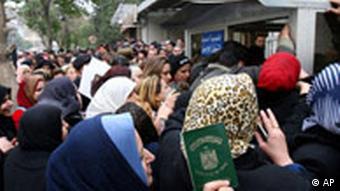 Holmes said that an estimated 35,000 civilians were killed and another 36,000 injured in Iraq in 2006 alone. The survivors increasingly face violence, unemployment and lack of basic services as a result of religious, ethnic and political strife.

“I hope this conference will galvanize international support to provide them with more protection and assistance and I hope it will mobilize resources in establishing much needed protection space,” said UN Secretary General Ban Ki-moon in a video message.

“For neighboring countries, this means keeping borders open and upholding the principle of no forced return,” added Ban, who also made an appeal to other asylum countries.

Western nations urged to do more

Amnesty International, Human Rights Watch and the Norwegian Refugee Council especially singled out Britain as needing to do more in a joint appeal to the US and the EU.

"We ask that you take the lead in Europe by immediately announcing a program to resettle some of the Iraqi refugees currently living in the most difficult conditions," the three groups said in a joint appeal to Prime Minister Tony Blair.

In a separate statement, Amnesty International called on Western countries to set up a resettlement program for Iraqis that goes "far beyond token numbers and should constitute a significant part of the solution to the current crisis."

The charitable organization Caritas International called on Germany to increase its support. Germany’s foreign ministry had announced on Monday that it would make 2.2 million euros in aid available to Iraqi refugees and displaced persons.

Only about 20,000 Iraqis applied for asylum in the European Union last year, though the number is quickly growing. Sweden takes in more than half of all Iraqi asylum seekers to Europe.

About 95 percent of Iraqi refugees are in the Middle East, but
the number reaching industrialised countries, mainly Europe, surged by 77 percent (22,200) in 2006, according to UNHCR data. EU interior and justice ministers are to examine the issue at a meeting on Thursday. 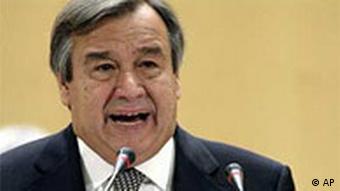 These countries, however, have reached their limits in financing the aid effort. The International Federation of the Red Cross and Red Crescent called Tuesday for 11.1 million euros to aid some 100,000 Iraqi families living in Jordan and Syria.

"We will take the lead"

About 450 representatives from 60 countries participated in the UN conference, including Iraq’s foreign minister, Hoshiyar Zebari.

In an interview with Reuters Television, Zebari said, “We’ve come here with a very clear message, that these are our people and that the Iraqi government will take the lead in addressing the needs of its people. We have concrete ideas and we will raise them here.”

Pope Benedict on Sunday celebrated Easter mass by decrying the "continual slaughter" in Iraq and making a plea for peace in his traditional Easter message on Peter's Square on the holiest day of the Christian calendar. (08.04.2007)

In Unstable Iraq, German Firms Rely On Local Help to Do the Job

Violence, kidnappings and crumbling security in Iraq has meant that German businesses and aid groups are increasingly turning to local Iraqis to run the show. (28.03.2007)

The EU has promised to help Sweden deal with an influx of Iraqi refugees as the country, which takes in nearly half of the Iraqis who flee to Europe, struggles with increased human trafficking. (16.02.2007)