The International Court of Justice has backed Mauritius in a territorial dispute with Britain over the Chagos Islands. The court said Britain should end its administration of the archipelago as soon as possible. 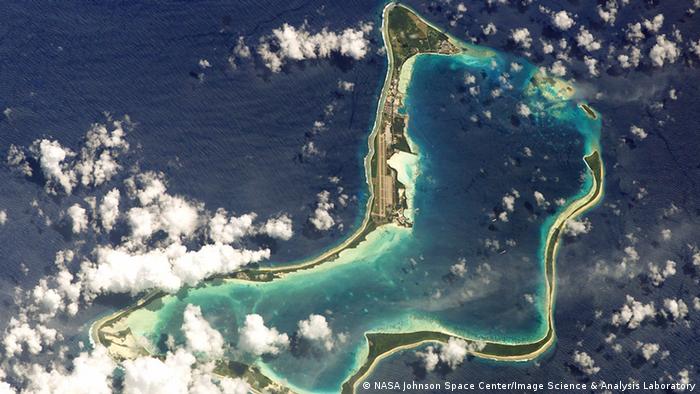 The UN's top court for disputes between states said on Monday that Britain should give up control over the Chagos Archipelago in the Indian Ocean "as rapidly as possible," thus backing Mauritius in a long-running dispute with the UK.

The opinion, which is non-binding but carries high symbolic importance, will be good news to some 2,000 people that Britain evicted from the islands during the 1960s and 1970s so the US military could build a base on Diego Garcia, the largest atoll in the group (top picture).

A British diplomatic cable at the time of the evictions described it as the removal of "some few Tarzans and Man Fridays."

Many of the Chagossians have resettled in the UK, where they have carried out a prolonged legal battle to win the right to return home. Others moved to Mauritius and the Seychelles.

Read more: Mauritius turns 50: How far has it come?

Judges at the International Court of Justice (ICJ) in The Hague said Britain had illegally split the islands from Mauritius in 1965, three years before Port Louis gained independence.

Mauritius had argued before the court that it was unlawful for Britain to have broken up Mauritian territory while it was still the colonial power. A majority of the ICJ judges accepted this view, saying that "the process of [British] decolonization of Mauritius was not lawfully completed" because of Britain's actions.

Although Britain has apologized for its treatment of the Chagossians, calling it "shameful," it has slammed Mauritius for bringing the case to the ICJ. The US, which now leases Diego Garcia from the UK, has said the court had a "duty" not to take sides.

The US military base on Diego Garcia played an important role in the Cold War and was also used in US bombing campaigns against Afghanistan and Iraq in the 2000s. The atoll is now inhabited only by military personnel and civilian contractors.

The islands are some 500 kilometers (310 miles) south of the Maldives archipelago and some 2,000 kilometers from Mauritius.

The ICJ had been asked by the UN General Assembly in February 2017 to give its advice on the dispute between Britain and Mauritius.

The court has handed down only 28 verdicts since being established in 1946 to settle disputes between UN member states.

tj/jm (Reuters, AP, AFP)Every evening at 1830 UTC, DW's editors send out a selection of the day's hard news and quality feature journalism. You can sign up to receive it directly here.