UN chemical weapons inspectors have returned to the Syrian capital of Damascus after carrying out testing at the location of an alleged poison gas attack. They had come under fire en route to the site on Monday. 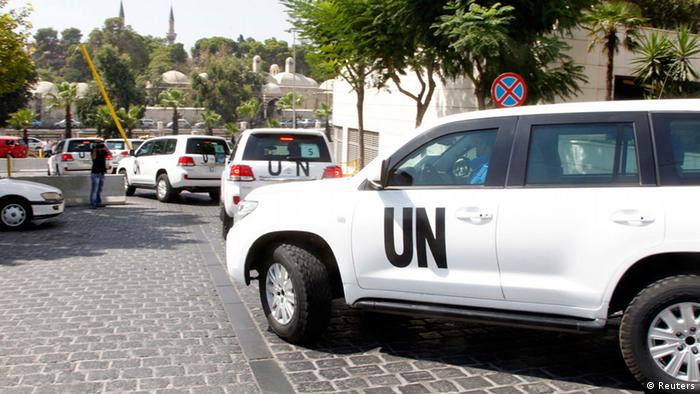 The inspectors set out a day after receiving permission from Syrian President Bashar al-Assad's government to inspect the site. But the UN team was forced to briefly pull back on its way to the site when unidentified snipers attacked the convoy.

They later continued, reaching the field hospital in the town of Moadamiyet al-Sham to interview medical staff and obtain samples.

There are fears, however, that access to the site - subject to shelling since Wednesday - and the victims had come too late for the UN team to gather useful samples.

"Assad forces continued conventional shelling of the area, while locals and others cleared away bodies," former UN advisor George A. Lopez Of the University of Notre Dame's Kroc Institute for International Peace Studies told the Reuters news agency. "This hastened breakdown and contamination of chemical compounds needed to provide undeniable proof of the type of gas, its concentration level, and its source to the inspectors, who may still be one or more days away from taking soil and other samples."

The investigators are only licensed and allowed to check whether a chemical attack took place, they have no mandate to investigate who was behind any attack.

Mutual accusations after attack on UN

The Syrian government and the opposition fighters both blamed each other for the attack on the UN convoy. State media outlet SANA reported that the attack was the work of "terrorists," the term commonly used to describe rebel fighters on Syrian media. The opposition, meanwhile, said Assad's forces were behind the attack.

"The National Coalition of the Syrian opposition and the Free Syrian Army firmly condemn the action of the Assad regime militias at the entrance to Moadamiyet al-Sham ... by opening fire on a car transporting the UN team," the political opposition and armed rebels said in a statement.

Britain-based Syrian Observatory for Human Rights claimed over 1,300 people died in the attack last Wednesday, while Doctors Without Borders said 355 people had died of "neurotoxic" symptoms.

The inspection came as foreign leaders consider consequences for the government of President Assad if his regime is found responsible for the attack, which was allegedly carried out using gas-filled rockets.