The US, Russia, EU and United Nations have expressed concern about escalating violence in Jerusalem. The UN Security Council is to hold closed-door talks and called on all sides to "demonstrate maximum restraint." 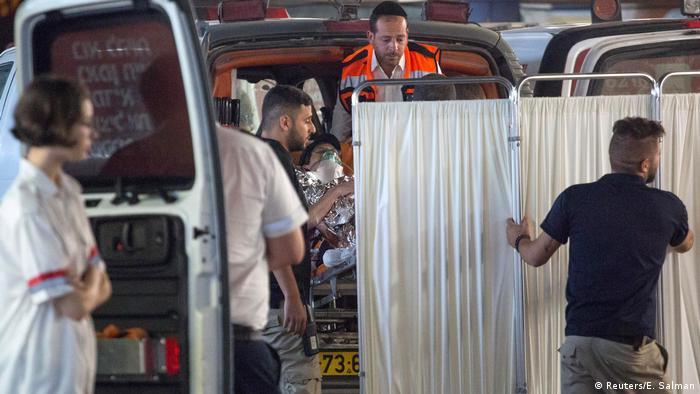 The UN Security Council will hold closed-door talks on Monday, diplomats said on Saturday. The meeting will "urgently discuss how calls for de-escalation in Jerusalem can be supported," Carl Skau, Sweden's ambassador to the Security Council, said.

Sweden, France and Egypt had all requested an urgent meeting of the Security Council to discuss how to deal with the deadliest outbreak of Israeli-Palestinian violence for years, a Swedish diplomat said on Twitter.

The German Foreign Ministry called for all sides "to make their contribution to the de-escalation of the situation and not to give in to those who call for violence or accept it," in a statement on its website.

The envoys of the US, Russia, the EU and UN on Saturday issued a statement saying they "strongly condemn acts of terror, express their regret for all loss of innocent life caused by the violence, and hope for a speedy recovery to the wounded." The envoys called on all parties to "demonstrate maximum restraint, refrain from provocative actions and work towards de-escalating the situation."

Israel's military sent reinforcements and put security on high alert across Jerusalem and the occupied West Bank on Saturday, as several deaths the day before stoked fears of escalating violence over a holy site.

A Palestinian man stabbled to death three Israelis in a West Bank settlement on Friday evening, hours after clashes in Jerusalem over a holy site left three Palestinians dead.

"An assailant infiltrated a private home in the community of Neve Tsuf, northwest of Ramallah, and stabbed four Israeli civilians," the Israeli army said in a statement.

An Israeli military official said a grandfather and two of his children were killed and the grandmother was wounded.

The attacker was identified as 19-year-old Omar al-Abed, a Palestinian from the West Bank village of Khobar, near Ramallah.

Eli Bin, the head of Israel's rescue service MDA, said an off-duty soldier next door heard screams, ran to the house and shot the attacker through a window. Bin said the attacker was wounded and evacuated to hospital.

According to his Facebook posts and statements from his family, al-Abed was reportedly angry over the loss of Palestinian lives and wanted to protect the honor of the Jerusalem holy site at the heart of the latest tensions between Palestinians and the Israel.

Israeli Defense Minister Avigodor Lieberman said Saturday the attacker's home would be bulldozed, a controversial practice that human rights groups criticize as an act of collective punishment against an entire family.

Also on Saturday, the Israeli military searched the assailants house and arrested his brother.

Three Palestinians had been killed in protests in Jerusalem earlier on Friday in clashes with Israeli forcesover entry restrictions at the holy site of Haram al-Sharif, also known as Temple Mount.

The protests - over the placement of metal detectors and turnstiles at the site - turned into clashes in which the three men were shot dead, the interior ministry said. At least 400 people were hospitalized, the ministry reported.

Security forces prohibited Palestinian men under the age of 50 from entering Jerusalem's Old City for Friday Muslim prayers this week. They have allowed access to women of all ages.

Palestinian President Mahmoud Abbas announced on Friday that he would suspend all contacts with Israel because of the new security measures. He also urged the United States to intervene with Israel to drop the security changes.

Israeli-Palestinian tensions over the Holy Land's most revered shrine are severe.

Disputes over the 37-acre (15-hectare) walled, hilltop platform in Jerusalem's Old City have triggered several major confrontations in the past.

Israel began installing metal detectors at the gates of the compound, saying extra measures were needed to prevent further attacks.

Since 1967, Israel has increasingly cut off east Jerusalem from its West Bank hinterland.

Under the post-1967 arrangements, Muslims administer the compound, while Jews can visit, but not pray there. This arrangement held for decades - in large part because leading rabbis, citing religious purity laws, banned Jews from entering.

An assailant injured four Israelis, including a 13-year old girl, in the latest attack. US Secretary of State John Kerry is to visit Israel in the coming days to help with 'stopping the violence.' (21.11.2015)

Israeli authorities have reopened a sensitive holy site following an attack on Friday that killed two policemen. The decision to close the Temple Mount, or Noble Sanctuary, for prayers had sparked anger among Muslims. (16.07.2017)

Israel tightens security for Palestinian protests triggered by tensions over the placement of metal detectors at the Jerusalem holy site Haram al-Sharif, also known as Temple Mount, worshipped both by Jews and Muslims. (21.07.2017)