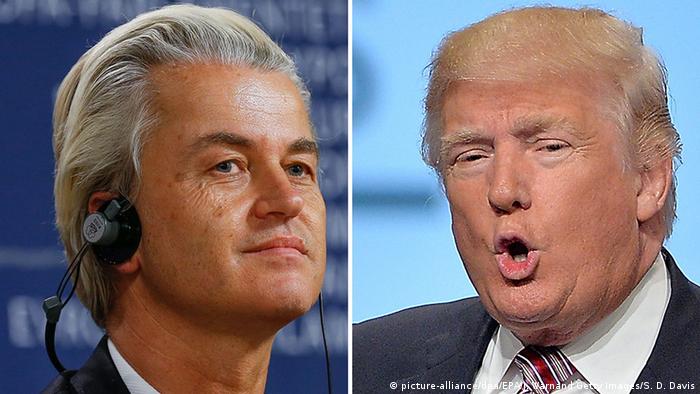 Zeid said Trump and Dutch nationalist Geert Wilders (picture above, left) are among the "populists and demagogues" - which also included Hungary's Prime Minister Viktor Orban, leader of France's National Front (FN) Marine Le Pen, and the UK's leading Brexit campaigner Nigel Farage - who have mastered propaganda like the "Islamic State" (IS), saying that they "benefit from each other."

"All seek in varying degrees to recover a past, halcyon and so pure in form, where sunlit fields are settled by peoples united by ethnicity or religion," Zeid told the inauguration of the Peace, Justice and Security Foundation, adding that promises to recover such a past were fiction.

"Its merchants are cheats," he said, accusing populist leaders of using "half-truths and oversimplification" to feed the fears of "anxious" individuals. 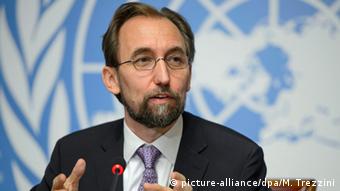 It was a simple formula "to make your target audience feel good by offering up what is a fantasy to them, but a horrendous injustice to others."

"Make no mistake, I certainly do not equate the actions of nationalist demagogues with those of Daesh," Zeid said, using the Arabic term for IS. "But in its mode of communication, its use of half-truths and oversimplification, the propaganda of Daesh uses tactics similar to those of the populists."

Wilders ahead in opinion polls

Ahead of the Netherland's elections in March next year, Wilders' Freedom Party (PVV) launched its campaign platform last week, vowing to "close mosques, Islamic schools and ban the Koran" if elected.

The PVV, which has been leading in opinion polls, also vowed to reverse the "Islamization" of The Netherlands by closing the borders, shutting asylum seeker centers, banning migrants from Muslim countries and stopping Muslim women from wearing a headscarf. Wilders also wants to leave the European Union (EU).

Zeid said on Monday that he was angry "because of Mr. Wilder's lies and half-truths, manipulations and peddling of fear."

"We must pull back from this trajectory," Zeid warned, adding that there was a risk "the atmosphere will become thick with hate" which could "descend rapidly into colossal violence."

Reacting to Zeid's speech, Wilders said in a text message to French news agency AFP that the Jordanian prince was "an utter fool."

"Another good reason to get rid of the UN," the populist politician said.

"Islam and freedom are incompatible whatever this Jordanian bureaucrat says," Wilders added.

Amid talk of Merkel's defeat in Mecklenburg-Western Pomerania (even though she wasn't actually a candidate), there was little discussion of the winners. But the SPD and the Left also lost votes to the right-wing AfD. (05.09.2016)

Austria's FPÖ Party on the Rise