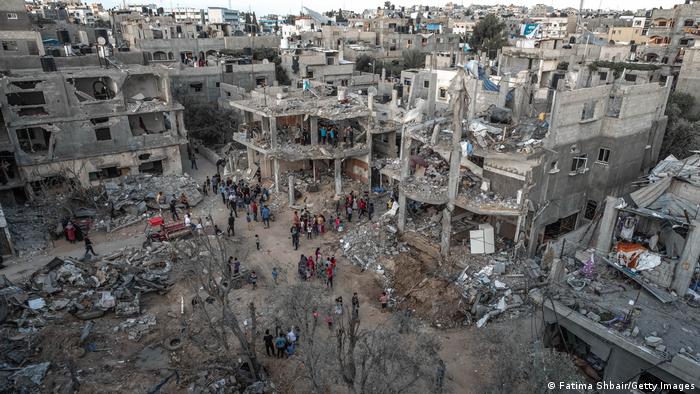 The UN Human Rights Council (OHCHR) is discussing launching an investigation into the fighting between Israel and the militant group Hamas earlier this month.

Thursday's session, called for by the Pakistani and Palestinian delegations, convened to address "the grave human rights situation in the occupied Palestinian territory, including east Jerusalem."

"If found to be indiscriminate and disproportionate impacting on civilians and civilians' objects, such attacks may constitute war crimes," Bachelet said.

"Hamas's rockets are indiscriminate and fail to distinguish between military and civilian objects, and their use, thereby, constitutes a clear violation of international humanitarian law,'' she added.

Hamas and Israel: Beyond the Cease-fire

Hamas and Israel: Beyond the Cease-fire

What have Israeli and Palestinians envoys said?

Israel's ambassador to the UN in Geneva, Meirav Eilon Shahar said that Hamas had fired more than 4,400 rockets on Israeli civilians.

Shahar added that Gaza militants used "human shields" as they launched those rockets from houses, hospitals and schools.

"Each one of these rockets constitutes a war crime." she said.

Meanwhile, Palestinian Foreign Minister Riyad al-Maliki said "the Israeli occupation is the root of the problem" and called for sanctions on Israel.

The council also heard a statement by Mona al-Kurd, a Palestinian resident of east Jerusalem's Sheikh Jarrah neighborhood, which has been the center of recent disputes.

What is on the session's agenda?

The 47-member council is expected to vote on a draft resolution, presented by the Organization of Islamic Cooperation, later on Thursday.

The proposal calls on the OHCHR to "urgently establish an ongoing independent, international commission of inquiry" in occupied Palestinian territories, including east Jerusalem.

According to the draft text, investigators should probe "all alleged violations and abuses" of international law linked to the tensions that triggered the latest violence and their "root causes."

"Long-standing and systemic impunity for international law violations has thwarted justice, created a protection crisis and undermined all efforts to achieve a just and peaceful solution," it added.

What if the resolution passes?

It would establish the council's first-ever open-ended commission of inquiry, which is the highest-level probe that the council can order.

The council has previously ordered eight investigations into human rights violations in the Palestinian territories. But Thursday's would be the first with a mandate to scrutinize the "root causes" in the conflict.

Israel has repeatedly complained that it faces bias in the council. The former United States administration had raised concerns over the council's credibility, citing an "obsession with Israel."

Israel's ambassador to the council criticized Thursday's session and the draft resolution, saying that their only purpose was "to blame Israel, whitewash the crimes committed by Hamas, and for the Palestinian Authority to avoid assuming its responsibilities towards its own population."