UN report slams US for criminalizing poverty as destitution grows

The report concludes that the persistence of extreme poverty in the US is a political choice made by people in power. It also criticizes US policy for making health care a privilege, rather than a right. 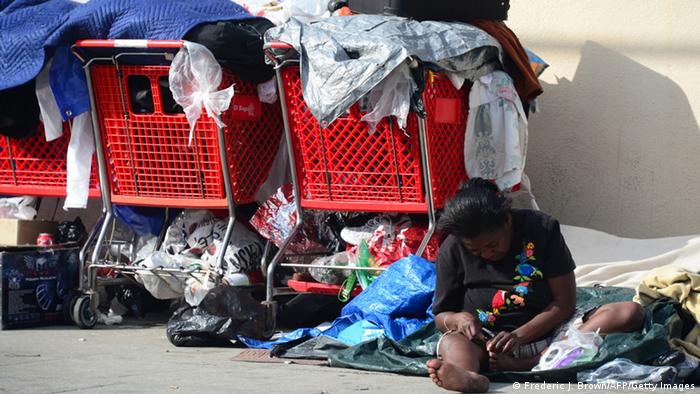 Poverty in the United States is widespread and worsening under President Donald Trump, according to a human rights investigator for the United Nations.

Philip Alston, UN special rapporteur on extreme poverty, said the Trump administration appears determined to pull the social safety net out from under millions of poor people while rewarding the wealthy with tax cuts.

In his report, Alston called on the US to address the underlying problems facing the underclass rather than "punishing and imprisoning the poor."

Homeless in the US

He noted that welfare benefits are being slashed and access to health care has become more difficult during Trump's presidency. This, in conjunction with "financial windfalls" for the super rich and big corporations, has accelerated inequality.

Since President Lyndon Johnson's war on poverty in the 1960s US social policy towards the poor has been "neglectful at best," Alston said.

"But the policies pursued over the past year seem deliberately designed to remove basic protections from the poorest, punish those who are not in employment and make even basic health care into a privilege to be earned rather than a right of citizenship," he said.

In a country of about 325 million people, nearly 41 million live in poverty — including 18.5 million in extreme poverty. Alston said children accounted for 33 percent of the poor. No other industrialized country had so many children mired in poverty, he said.

The data used to compile the UN report only covers the period through 2016, so there are no comparative figures that could measure poverty levels before and after Trump took office in January 2017.

His report is a compilation of data in conjunction with his travels to various part of America, including rural Alabama, a Los Angeles slum, and the US territory of Puerto Rico.

Alston cited "shameful statistics" linked to entrenched racial discrimination. He said African Americans are 2.5 times more likely than whites to live in poverty and their unemployment rate is more than twice as high.

He criticized the criminal justice system, noting that it sets large bail bonds for a defendant seeking to go free pending trial. This means wealthy suspects can afford bail while the poor remain in custody and often lose their jobs as a result, even if they are ultimately acquitted.

"There is no magic recipe for eliminating extreme poverty and … government must make its own good-faith decisions," he said. "At the end of the day, however, particularly in a rich country like the United States, the persistence of extreme poverty is a political choice made by those in power."