The IAEA has urged Iran to cooperate as the agency gathers information on Tehran's nuclear program. It confirmed Tehran was preparing to use more advanced centrifuges — further breaching a fragile 2015 nuclear deal. 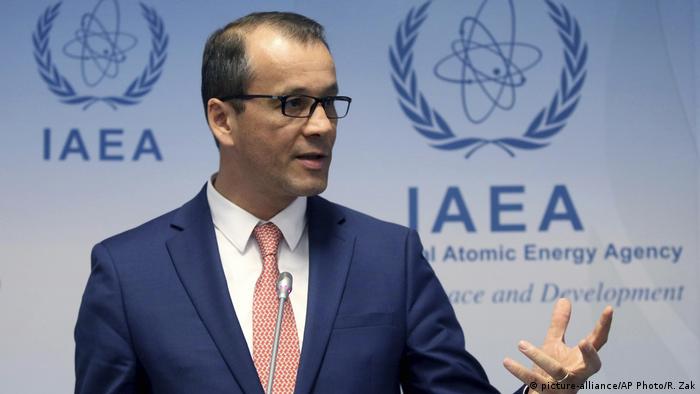 The head of the International Atomic Energy Agency (IAEA) urged Iran on Monday to quickly cooperate and provide information on its nuclear facilities, equipment and activities.

"Time is of the essence," Cornel Feruta, the acting chief of the UN's nuclear watchdog, told a news conference, a day after holding talks in Tehran.

He added that he was pleased with input so far from Iranian officials and that his message had been "very well understood."

Last week, the Wall Street Journal reported that Iran had been hampering an IAEA investigation into a warehouse in Tehran.

Iran pushing past boundaries of deal

The agency said that all the centrifuges had been "prepared for testing" but that they had not yet been tested as of the inspection over the weekend. The devices enrich uranium by rapidly spinning uranium hexafluoride gas.

A European Union spokesperson told DW that the IAEA's findings were of "great concern" to the bloc and that it is "extremely worrisome" that Tehran intends to install even more centrifuges, as they could "significantly increase Iran's enrichment capacity."

"We have been clear and consistent that our commitment to the nuclear deal depends on full compliance by Iran," the EU spokesperson said.

Tehran has already announced the step, making it the latest violation of the 2015 Iran nuclear agreement.

Under the international accord, Iran is limited to operating older IR-1 model centrifuges, but inspectors saw several advanced IR-6, IR-4 and IR-5 models.

Berlin says centrifuges 'a step in the wrong direction'

The landmark accord, which lifted economic sanctions in return for strict curbs on Iran's nuclear activities, has been threatening to collapse ever since US President Donald Trump pulled out of the agreement last year.

Tehran has been increasing pressure on the remaining signatories — which include Britain, France, Germany, China, Russia and the European Union — to ease the toll of US sanctions and maintain oil shipments.

European efforts to save the accord have been stalling, although French President Emmanuel Macron has proposed creating a $15 billion (€13.6 billion) line of credit for Iran to encourage it to stay in the nuclear deal.

German Foreign Ministry spokesman Rainer Breul said the government supports Macron's efforts to de-escalate the situation, but urged Iran "to return" to its commitments under the deal.

He added that Germany saw Iran's advanced centrifuges as "a step in the wrong direction."