The discovery suggests that the ‘Golden Triangle’ region could become a global supplier for deadly synthetic opioids. The UNODC dubbed the seizures “one of the most successful operations” in the country’s history. 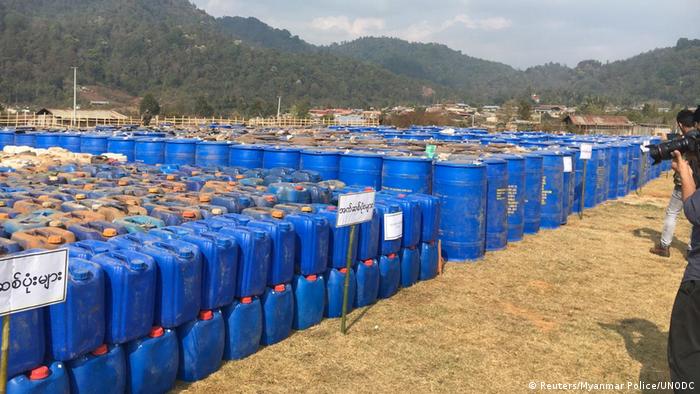 Myanmar police have conducted ''record-breaking'' seizures of liquid fentanyl and methamphetamine, in "one of the most successful operations" in the country’s history, the United Nations Office on Drugs and Crime said on Monday.

The discovery of an ''unprecedented'' amount of fentanyl offers the first evidence that the synthetic opioid is being produced in Southeast Asia’s ''Golden Triangle'' region, a global hub of drug trafficking and production.

"'What has been unearthed through this operation is truly off-the-charts, and it is clear that a network of production facilities like those found would not be possible without the involvement and financial backing of serious transnational organized criminal groups,'' Jeremy Douglas, the agency’s regional representative, said in a statement.

The raids, carried out between February 20 and April 9 in Kutkhai Township in Shan State, eastern Myanmar, started with a small seizure of methamphetamine tablets, and led to the discovery of 3,748.5 liters of methyl fentanyl, 193.5 million methamphetamine pills, over 500 kilograms of crystal methamphetamine, 292 kilograms of heroin, and other significant quantities of opium, morphine, ephedrine, and precursor chemicals.

They also led to the arrest of 33 Myanmar citizens and foreign nationals.

The UN agency warned that the discovery comes at a time when East Asia and Southeast Asia are beginning to see a growing demand for synthetic opioids in the regional market, and is an indicator that the region will become a source of synthetic drugs for other parts of the world.

''It is more than meth tablets and crystal, and has evolved to synthetic opioids on a scale nobody anticipated,'' said Douglas.

Myanmar police also seized laboratory and production equipment, and 39 different chemicals, ''all of which were largely trafficked'' across borders within the region.

Myanmar has been under pressure in recent years to stem the production and export of drugs in the region. The raids should ''make it clear to traffickers that their days of operating in Myanmar are numbered,'' said Colonel Zaw Lin, the head of law enforcement with the country’s Central Committee for Drug Abuse and Control.

Fentanyl is highly lethal, with a strength 50 times that of heroin and up to 100 times more potent than morphine.

Shan State is part of the Golden Triangle — a remote region where the borders of Myanmar, Laos and Thailand meet. Myanmar is the world’s second biggest producer of heroin after Afghanistan, and is now thought to be the largest global source of methamphetamine, due to a wide availability of precursor chemicals from China.

Police in Thailand have seized a bumper haul of the drug methamphetamine, after a series of raids in the past week. The UN has warned that the "Golden Triangle" region is flooding the region with drugs. (03.04.2018)

The business of opium in Myanmar

Deaths resulting from drug overdoses in the US are higher than those from guns and car crashes. Experts believe that an increased use of fentanyl is to blame for the "tragic milestone."