Police in Thailand have seized a bumper haul of the drug methamphetamine, after a series of raids in the past week. The UN has warned that the "Golden Triangle" region is flooding the region with drugs. 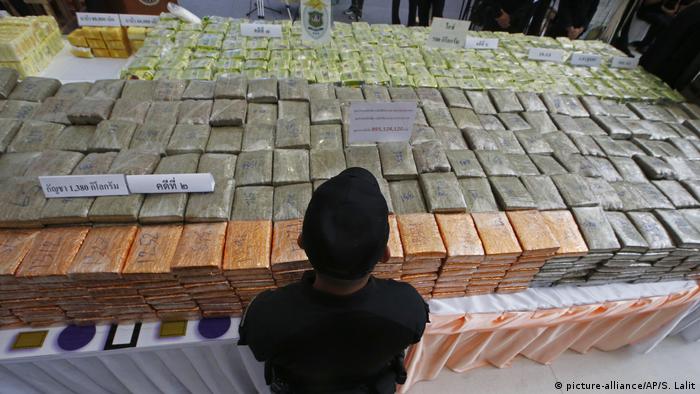 Thai police said on Monday said they had confiscated some 700 kilograms (1,540 pounds) of crystal meth as part of a series of raids in which 11 people were arrested.

The drugs, which were seized en route to Malaysia, were said to be worth an estimated 700 million Thai baht ($22.42 million, 18.16 million euros), within Thailand. Police said the net worth outside the country would have been considerably higher.

The haul was made in the country's southern Chumpon region, although the drugs were said to have been produced in the northern "Golden Triangle" region, a remote region where the borders of Thailand, Myanmar and Laos meet.

Police Lieutenant General Sommai Kongvisaisuk, who heads the country's Narcotics Suppression Bureau, told reporters that the find would do little to stall production.

"We have intercepted a lot of drugs over the past year ...but the production capacity remains untouched."

The AFP news agency reported on Tuesday that a further, even larger quantity of crystal meth, had been found in the northern Chiang Rai province, at the heart of the Golden Triangle. The drugs were said to have been in fertilizer bags in a pickup truck.

A report by the United Nations Office on Drugs and Crime (UNODC) last year warned of the dangers that methamphetamines present, with a huge production capacity in the Golden Triangle. The triangle is a base for cartels who produce large quantities of opium and methamphetamine.

Crystal meth — a refined stronger variant of methamphetamine — is smuggled south into Malaysia or even to wealthier Australia, where its street price rises significantly.

Read more: Drug abuse in Nazi Germany was an 'indication of a society losing control'

A cheaper alternative, yaba – meth pills laced with caffeine – is also very popular in the region.

Separate unconnected raids on suspected drug smugglers have been carried out since March 25, resulting in at least seven other arrests.

Police displayed the haul – valued at 890 million baht overall – at a government compound north of Bangkok on Tuesday. Among the other illicit drugs seized were cocaine, cannabis and ecstasy.