Many activists have been targeted in former FARC territory now controlled by drug gangs and smaller rebel groups. The UN has said the government has not done enough to protect activists. 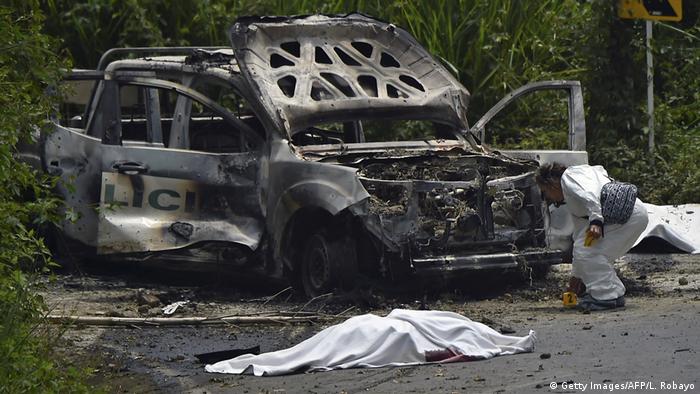 More than 80 human rights activists were killed in Colombia in 2017 despite a recent peace deal ending a decadeslong civil war, the United Nations said on Friday.

The conflict between the government and the left-wing Revolutionary Armed Forces of Colombia (FARC) killed about 200,000 people before FARC renounced violence in 2016 and vacated areas of the country it had previously controlled.

But the UN's human rights agency, UNHRC, said that while the peace deal led to fewer murders nationwide, violence against human rights activists has continued.

Activists in formerly FARC-controlled areas have been particularly at risk, as armed drug gangs and smaller rebel groups, including the National Liberation Army (ELN), have filled in the gaps left by FARC's dissolution.

"The consolidation of armed groups and criminal organizations in these areas can ... undermine potential human rights benefits of the peace process," the UN said.

Contract killers, the UNHRC said, appeared to be responsible for nearly three in every five of such killings. The UN report also noted that 14 female and 36 minority activists were among the murdered activists.

The agency accused the government of being partially to blame for the continuing violence.

"Some of the killings of human rights defenders, especially in areas of former influence of FARC-EP, could arguably have been prevented by a timely and coordinated State response to implement the (peace) Agreement," it said.

The government has said it is bolstering efforts to prosecute the people and groups behind the killings.