A UN rights envoy has called for an independent probe into the death of a South Korean protester killed at a protest last year. The elderly farmer died following months in a coma after being injured by water cannon. 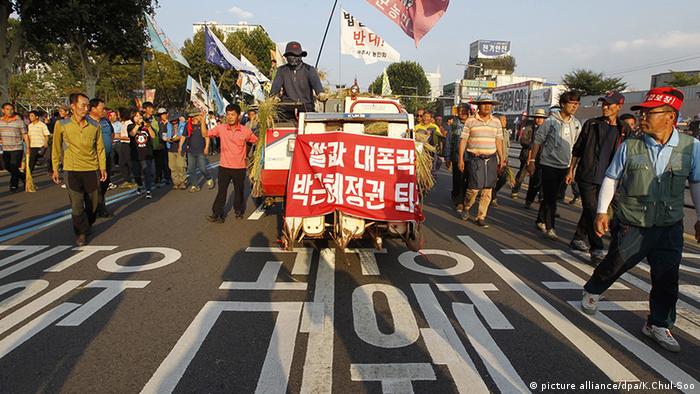 Some 70,000 people have taken to the streets of Seoul for the largest South Korean anti-government rally in years. The protesters spoke out against conservative labor reform and state-issued history books. (14.11.2015)

Protesters have staged a rally in Seoul calling for President Park Geun-hye to resign. It comes just weeks after farm and labor activists clashed with police at a demonstration in the South Korean capital. (05.12.2015)

UN Special Rapporteur Maina Kiai voiced "dismay" over Baek's death in a statement released late Wednesday, calling for an independent probe to punish those responsible.  "The perpetrators should be held accountable and the family of Mr. Baek receive appropriate compensation," Kiai said. "In addition, adequate measures must be taken to prevent a similar tragedy from happening in the future."

The plight of 69-year-old Baek Nam-ki has sparked widespread outrage with the police coming under fire for what critics describe as excessive use of force during public rallies.

He died Sunday at Seoul National University Hospital where he'd been hospitalized since November when he fell and hit his head during a large-scale demonstration against President Park Geun-hye's labor policies.

The hospital says the farmer died of an acute kidney injury, traumatic cerebral hemorrhage and subdural hemorrhage. Police and prosecutors had sought a warrant to conduct an autopsy to find the exact cause of his death, but a court rejected the request.

Activists say no autopsy is needed because it's obvious Baek died because of the water cannon.

Family members have refused an autopsy, accusing the police of trying to shrug off responsibility and build the case that Baek's death occurred due to diseases he previously suffered.

"The police already has his full medical records for (the) past 10 months ... and we don't want his body to be touched by the police that killed him in the first place," the family said in a statement.

Prosecutors received a warrant from a court Wednesday, allowing them to carry out an autopsy, but family members and hundreds of supporters are staking out the hospital in Seoul to block any attempts to take the body. 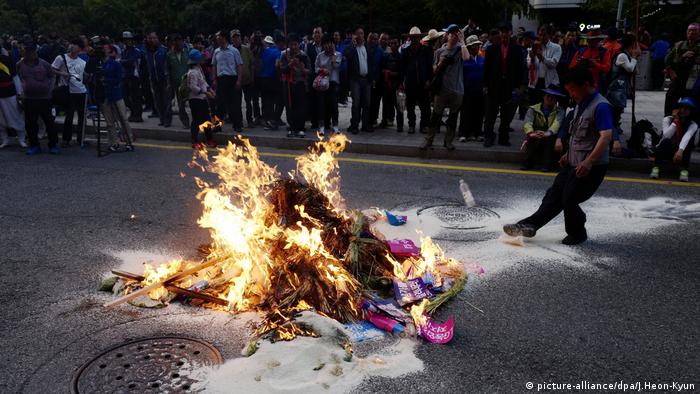 South Korean farmers burn sheaves of rice after marching against government's agricultural policy in Seoul, South Korea on September 22 2016. Some 4,000 protesters demand answers over the killing of Baek Nam-ki, a farmer who died September 25 following months of hospitalization after being knocked down by a police water cannon last November.

It's also garnered international attention from rights groups:  "His death increases the urgent need for the completion of a thorough, independent and impartial investigation into the excessive use of force on largely peaceful protesters including Baek Nam-ki himself," said Amnesty International East Asia Regional Director, Nicholas Bequelin.