Some 70,000 people have taken to the streets of Seoul for the largest South Korean anti-government rally in years. The protesters spoke out against conservative labor reform and state-issued history books. 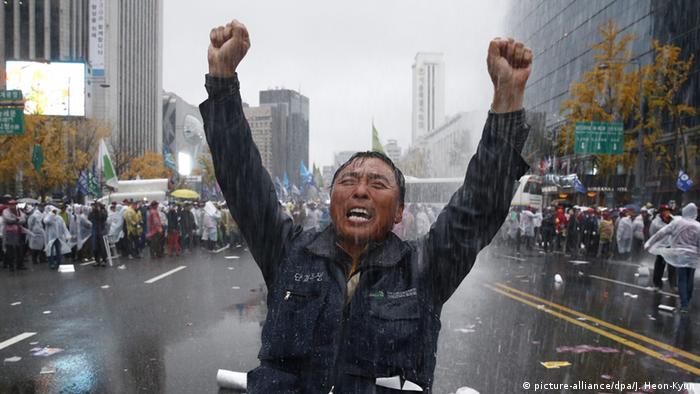 The security forces fired tear gas and water cannons, while protesters smashed police-vehicle windows and hit officers on top of buses with poles during Saturday's rally.

Authorities mobilized 20,000 riot police for fear of violence at the march against the conservative president, Park Geun-hye, and her government.

Demonstrators, many of them masked, chanted "Park Geun-hye, step down" and "No to layoffs" as they occupied a major downtown street.

At least 12 people were arrested for violent behavior, according to a police official in the South Korean capital.

The rally united the supporters of various labor, agricultural and civil organizations protesting the government's drive to change labor laws, open protected markets for some agricultural goods and impose state-issued school textbooks in 2017.

The proposed labor laws would allow companies to keep wages low and fire workers and activists, according to the militant Korean Confederation of Trade Unions (KCTU).

Earlier on Saturday, KCTU activists scuffled with scores of plainclothes policemen who tried to arrest the confederation's president, Han Sang-goon, during a news conference.

"If lawmakers try to pass the (government's) bill that will make labor conditions worse, we will respond with a general strike, and that will probably be in early December," said Han, minutes before fleeing, while his colleagues prevented the police from getting to him.

Seoul authorities had issued an arrest warrant for Han after he failed to appear in court in connection with his role in organizing a May protest that turned violent.

The government's bid to issue history textbooks for middle and high schools also sparked strong criticism in the Asian nation.

Although the books have not yet been written, activists fear that the Park administration would attempt to whitewash the transgressions of her father's rule.

Saturday's demonstration was the biggest since 2008, when about 100,000 people marched in Seoul against resuming the import of beef from the US, while the public was still worried over mad cow disease.

US intelligence: Russia and Iran actively interfering in election 59m ago