The international community has pledged to accelerate efforts to eradicate child labor by 2025 at a major UN conference in Buenos Aires. Around 10 percent of children have to work, and the problem could get even worse.

"We know what to do, and there are no excuses not to do so," said Guy Ryder, director-general of the International Labour Organization (ILO), the UN labor agency.

"The future is going to be a world free of forced labor and child labor."

The declaration spells out concrete actions aimed at eliminating child labor by 2025 and forced labor by 2030, as well as steps to improve employment opportunities for young people around the world.

"We hope that Buenos Aires will be the place where the international community takes measures so as not to tolerate the intolerable," Ryder said, adding that while there had been significant progress over the past 20 years, it is time "to do more and to do it better."

- Growing number of children forced to work in Nigeria

- Is child labor the price for e-cars?

From the workplace to the classroom

The declaration stressed that there are more than 150 million children in the workforce, many of them engaged in hazardous jobs. More than a third of them do not go to school.

Delegates gathered in the Argentine capital said many countries were failing to invest enough to ensure schools could provide children with meals, transport and occupational training — elements that could remove the need to work.

"We need to work hand in hand with the government so the facilities are there when we get a child out of work and back into education," Hillary Yuba of the Progressive Teachers' Union of Zimbabwe said in comments carried by the Thompson Reuters Foundation. 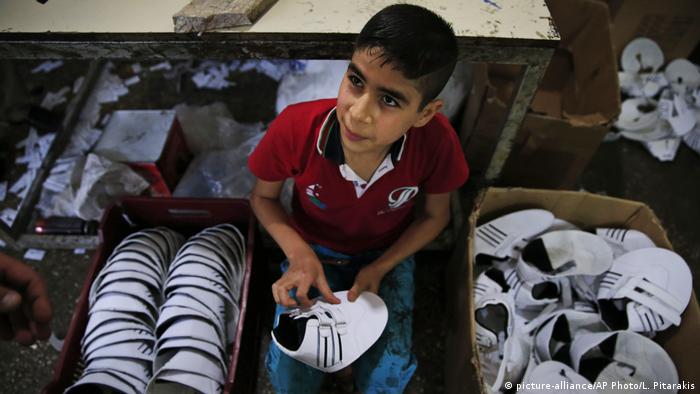 Mohammed, a Syrian refugee, works at a shoe shop in Gaziantep, southeastern Turkey

Children's activist Kailash Satyarthi, who was awarded the Nobel Peace Prize in 2014, told the foundation that an injection of $39 billion (€33 billion) could provide quality pre-primary, primary and secondary education to all children by 2030.

He said that although many countries had abolished school fees, the hidden cost of uniforms and transport still posed a challenge to poorer families.

The three-day conference, organized by the Argentine government with backing from the ILO, brought together government representatives, employers and workers, and civil society organizations.

Slavery still exists today - and is a booming business worldwide. Without slavery, most of the products we consume everyday would be significantly more expensive. (15.11.2016)

Industries that rely on child labor

The International Labour Organization says that 218 million children between 5 and 17 years old are in employment. DW looks at some of the most exploitative industries. (17.11.2017)