Negotiators at UN climate talks in Lima, Peru, have approved a draft laying out the key points for a global climate pact set to be agreed in Paris next year. The agreement came in a marathon overtime session. 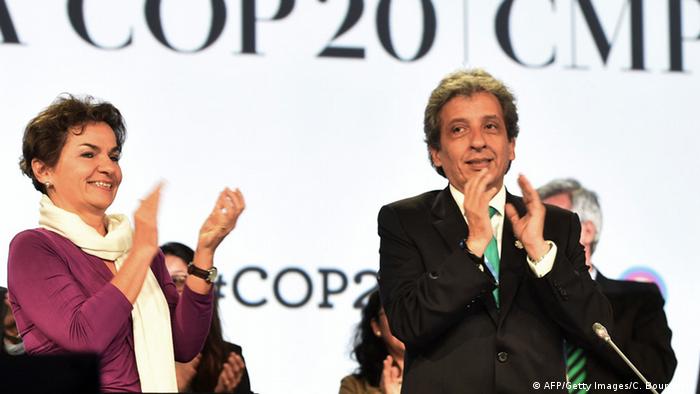 Delegates to a United Nations climate summit in the Peruvian capital, Lima, on Sunday approved the building blocks of a global climate agreement at talks that ran into the early hours of the morning.

The deal, called the "Lima Call for Climate Action," sets out the format for national pledges to cut carbon emissions that will be at the heart of the global pact, which is due to be adopted in Paris in December 2015.

The delegates at the two-week conference also agreed on the broad outlines for negotiations leading up to the deal.

The agreement came after delegates rejected a previous draft deal that developing countries said would take too much responsibility for global warming away from rich nations. The approved paper represents a major compromise that attempts to bridge the rift between rich and poor countries.

Developed countries want the pledges to center on measures to cut emissions, while developing nations want richer countries to take on more financial responsibility for damage caused by climate change, for example in small island states at risk of being flooded by rising seas.

Climate campaigners say the watered-down nature of the deal could have a negative impact on the effectiveness of the prospective Paris agreement, which is envisioned as the most ambitious accord in environmental history. The pact would be the first to bring all the countries of the world together in coordinated efforts to combat climate change by curbing greenhouse gases.

The aim of the pact is to limit global warming to no more than two degrees Celsius (3.6 degrees Fahrenheit) over pre-industrial levels in a bid to slow or stop a process that could lead to catastrophic climate change by the turn of the century.

In the past, Western nations have been responsible for most greenhouse-gas emissions, but they have been since overtaken by developing nations growing their economies.

Scientists have pointed to rising sea levels, intensifying heat waves and a higher incidence of floods and droughts as indicators that global warming is already having an impact on the global environment.

Last week, the UN weather agency said that 2014 could become the hottest year on record.

Getting all the countries into one boat, creating a fair funding deal for poor countries - those are the goals of a new world climate treaty. In Lima, world leaders are trying hard. But the devil is in the details. (12.12.2014)