UN ′appalled′ by rebel onslaught on Aleppo, warning it may amount to war crimes | Middle East | News and analysis of events in the Arab world | DW | 30.10.2016

UN 'appalled' by rebel onslaught on Aleppo, warning it may amount to war crimes

The UN has warned that the Syrian rebel offensive into government-held districts of Aleppo could amount to war crimes. The comments have come after state media reported of insurgent forces firing shells of toxic gas. 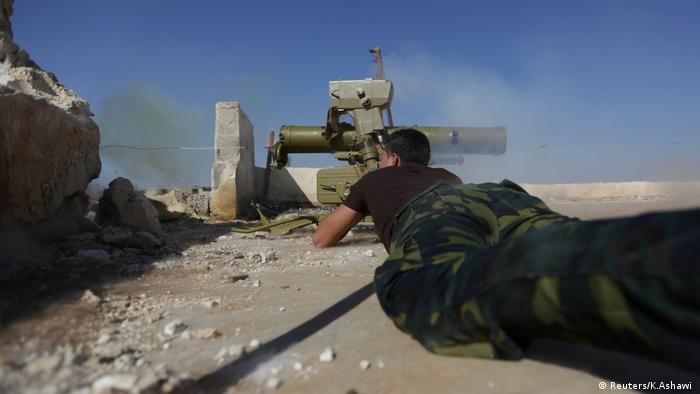 Syrian rebels said they had launched a large-scale operation to break the government's siege of eastern Aleppo. The move follows a major push by regime forces to retake the city in recent weeks.

Rebel forces on Sunday continued a vicious campaign in Aleppo, unleashing car bombs and a barrage of rockets into regime-held areas. Some 41 people civilians, including 16 children, have died and another 250 wounded in the fighting, according to the UK-based Syrian Observatory for Human Rights (SOHR).

The office for Syria's UN peace envoy Staffan de Mistura said it was "appalled and shocked by the high number of rockets" fired by the insurgents during the first three days of the offensive.

"Those who argue that this is meant to relieve the siege of eastern Aleppo should be reminded that nothing justifies the use of disproportionate and indiscriminate weapons, including heavy ones, on civilian areas and it could amount to war crimes," de Mistura's office said in a statement.

While claims of toxic gas could not be verified, Syria's state news agency SANA reported that 35 people were suffering from shortness of breath, numbness and muscle spasms due to "toxic gases" being fired on the frontline in Dahiyet al-Assad and into the regime-stronghold of Hamdaniyeh.

SOHR director Rami Abdurrahman confirmed reports that civilians were suffering from breathing difficulties, although he could not verify whether this was due to toxin gasses.

A rebel spokesman dismissed the claims, saying the opposition did not possess such weapons and would not attack areas where its own supporters are based.

Opposition fighters and government forces have in the past accused each other of firing chemical weapons into their respective areas. An international team has found that the Syrian government had carried out such an attack in 2015, the third to be blamed on President Bashar al-Assad's military forces.

Insurgent forces aim to breach a government siege on Aleppo's rebel-held districts in the east of the besieged city and push regime troops from the frontline. Sunday's intensive fighting rocked Aleppo's western districts, while airstrikes and artillery fire was heard from the city's the eastern districts, according to AFP correspondents.

The opposition has scored gains in the Dahiyet al-Assad district after 1,500 rebel troops amassed on a 15-kilometer (10-mile) front along Aleppo's western edges. However, they have struggled to push further east since.

An anonymous military source said the government is reinforcing its positions in and around the city to repel rebel advancements.

A tight siege has been in place since July, trapping as many as 275,000 civilians in the eastern rebel-held areas of Aleppo.