Thousands of ultra-Orthodox Jews have taken to the streets of Jerusalem in protest over plans by the Israeli government to enlist them in the military. Many are currently exempt on religious grounds. 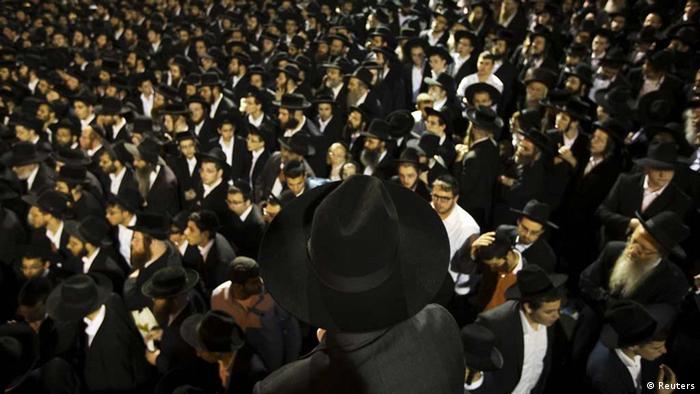 Police said between 15,000 to 20,000 protesters gathered outside the army recruiting office in Jerusalem, with some throwing stones and other objects at officers.

Many wore black coats - the traditional attire of ultra-Orthodox men - and crowded streets around the office, hearing rabbis warn that the proposal would harm their way of life.

In Israel, military service is compulsory; upon reaching 18 years of age, men are expected to serve three years and women two. Most ultra-Orthodox Jews are exempt from military service on religious grounds, as well as most Arab citizens of Israel. The coalition government of Prime Minister Benjamin Netanyahu has committed to increasing the numbers of ultra-Orthodox men enlisted in the military, in order to more evenly share the burden across Israeli society.

The party of Finance Minister Yair Lapid, Netanyahu's main coalition partner, fared well in January's polls, in part owing to a promise to resist religious pressure on the issue of conscription. Broadening the military's recruitment pool is strongly opposed by the two ultra-Orthodox parties, Shas and United Torah Judaism.

"The government wants to uproot [our traditions] and secularize us, they call it a melting pot, but people cannot be melted. You cannot change [our way of life]," Rabbi David Zycherman told the crowd of protesers in Jerusalem.

Police said about a dozen arrests were made, with stun grenades used to calm the unrest, while a water cannon was deployed after rubbish bins were set alight. Spokesman Micky Rosenfeld said at least six officers required medical treatment and two were hospitalized.