Ukranians look to the future in a new political lansdcape | News and current affairs from Germany and around the world | DW | 26.10.2014

In the Ukrainian capital, Kyiv, people have been casting ballots for a new parliament after a particularly eventful year. Many of the votes were set to go to parties linked with the Maidan pro-EU protests. 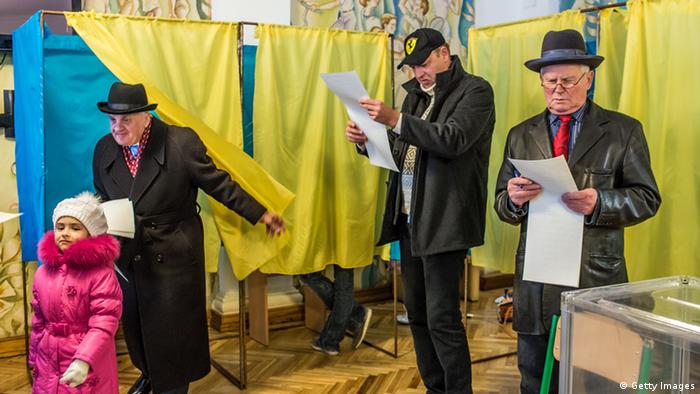 The clocks having gone forward, most of Kyiv's inhabitants appeared to have used their extra hour by staying in bed for a little longer.

In the morning, only a trickle of people were up and about. Policemen and soldiers were in the majority on the streets. And on the subway; fear of a terrorist attack appears to loom large - especially on the day that Ukraine elects a new parliament.

In a low-rise area of town on the western outskirts of Kyiv, an elderly couple leaves a polling station set up inside in a school. They hesitate before saying which party they have voted for. They don't want to be photographed or give their name. It is perhaps a sign of insecurity in a time of war. 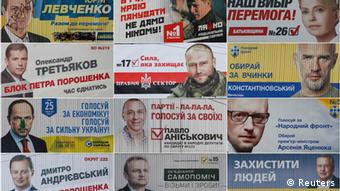 The new parliament is being elected against a background of ongoing conflict between government forces and pro-Russian separatists in eastern Ukraine.

Nationalists as a counterweight

"We voted for Swoboda," said the woman, finally. She looked around to see if anyone else was listening. "The party should make sure that corruption is finally eradicated.

"The oligarchs have to lose their power," her husband adds. "That's why President Petro Poroshenko's party did not get my vote." Poroshenko, a billionaire and until recently a businessman, is also considered to be an oligarch. Some, like the man, believe that the nationalists will ensure that Poroshenko doesn't have too much power.

Exit polls point towards victory for pro-Western parties in Ukraine

Exit polls indicate parties favoring a pro-Western direction have won the most votes in Ukraine's parliamentary elections. The biggest share was won by the party of Ukrainian President Petro Poroshenko. (26.10.2014)

With huge a huge military presence in parts of the country, Ukraine is holding its first election in wartime. Observer Tana de Zulueta tells DW about the effects this will have on the poll. (26.10.2014)

While the shooting continues in Eastern Ukraine despite a formal ceasefire, voting for a new parliament is under way. The winner in this election, which brings closure to the Maidan protests, is already known. (24.10.2014)

The nationalist Swoboda (Freedom) party garnered about 10 percent of the vote in the previous election in 2012 - mostly in Kyiv and western Ukraine. Swoboda was one of the driving forces during the opposition protests last winter. Nowadays their representatives sit as part of the government, but their popularity is on the slide.

A whisper of support

At the end of the brief conversation, the woman gives away a little more information. She worked as a teacher, she says, and finds that "Right Sector is agreeable." She speaks the words quietly, almost whispering them. Right Sector is a new right-wing party that was founded only a few months ago. It was created with a baseline support from several political factions that never had a place in parliament. Its followers were among those who fought with police during the winter protests.

According to polls, Right Sector has no chance of entering parliament. Meanwhile, more and more people begin to arrive to cast their votes. A young woman who has come along with her husband and young son says she has voted for a new party: "Hromadjanska Posiziga" (Civic Position). The party was not represented in the previous parliament and considered something fresh and new. 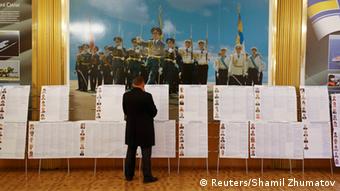 Many of its supporters were at the protests from the very beginning. "I know a few of the people from this party personally. They were involved at the time," says the woman. Corruption, she says, is the greatest evil in Ukraine and she hopes the new government makes a priority of tackling bribery.

'No big mistakes so far'

The nearest polling station is a few streets away. Here, too, there is also little clamor to vote. "I voted for the Poroshenko Bloc," says a man in his early thirties. "He has taken on a great responsibility and, until now, he hasn't made any big mistakes. Poroshenko's negotiation of an agreement with the pro-Russian separatists in Ukraine's s Donbass region was the correct thing to do, the man says. "First you have to take the diplomatic route," he says. "Only after doing that can you go and recapture Donetsk and Luhansk with weapons."

And that's the opinion of many in Kyiv who were voting for their country's new parliament this Sunday. The Russian-annexed peninsula of Crimea will be Ukrainian once again, many say. On the question of how to achieve that, most just shake their heads. "That will be difficult," is the overwhelming consensus.