Ukrainians veer toward right-wing nationalism | Europe| News and current affairs from around the continent | DW | 12.12.2012

Few Ukrainians are fond of their current "corrupt dictator." Yet their swing toward the opposition will serve them no better. The Svoboda Party holds 10 percent of parliament and only just removed its Nazi insignia. 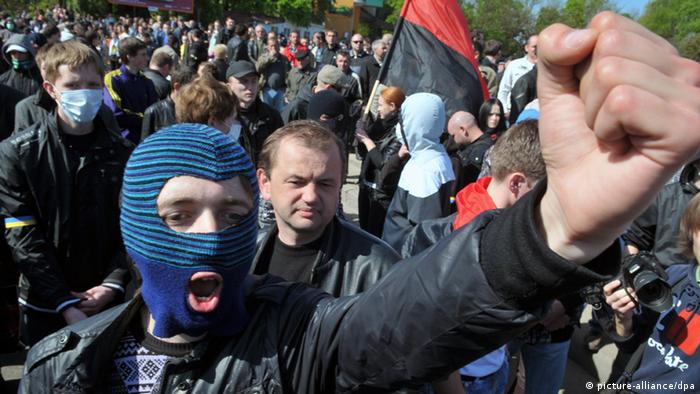 For the 37 parliamentarians of Svoboda, Ukraine's All-Ukrainian Union Party, December 12 is a special occasion. On this day Ukraine's unicameral parliament, the Verchovna Rada, convenes its yearly constitutional session. In a historical first, however, a right-wing extremist party will attend. They are part of a minority coalition in Ukraine's parliament.

"Now we can take our ideas forward not only at rallies or on talk shows, but on the parliamentary tribunal, as well," Svoboda deputy Andrej Mochnik told DW. The party's tone, however, might shortly rise in pitch. The Svoboda party intends to use any and all means, Mochnik said, to rid Ukraine of a "corrupt dictator" - Viktor Yanukovych - and of what he calls "anti-Ukrainian forces." 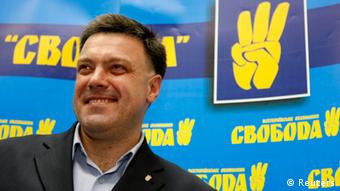 In October, more than ten percent of Ukraine's electorate voted for the nationalist Svoboda party in parliamentary elections. Now, Svoboda would like to leverage its parliamentary position by working in tandem with opposition groups.

It's a tactic many saw coming. During the campaign, Ukrainian intellectuals delivered an open letter to those same opposition parties, warning them to not ally themselves with the nationalists. A party calling itself "Unified Opposition" has already done just that. Led by Arsenij Jazenjuk, a supporter of former Prime Minister Yulia Tymoshenko, the party has joined forces with Svoboda and put forth candidates under Svoboda's name.

One of the signatories to the open letter was Taras Wosniak, a publicist from the city of Lemberg in western Ukraine. In a talk with DW, she warned about the consequences of a partnership with extremists.

"Appearing together jointly only serves to legitimate that party. The authoritarian regime under President Yanukovych will use Svoboda to discredit the opposition," Wosniak said.

The rise of nationalist parties in Ukraine has unsettled immigrants and many Russians residing the country. Svoboda's plans include a halt in immigration and a requirement that all civil servant jobs be filled by ethnic Ukrainians.

Speeches filled with racism and resentment are a daily facet of the party's public persona. During the Eurovision song contest this year, leading members of the party complained publicly that Ukraine was represented by a singer of African descent.

Svoboda's platform aims for nothing less than a "social and national revolution" in Ukraine. Associations with "National Socialism," therefore, are no accident. The party was formerly known as the "Social-National Party of Ukraine."

Yet in 2004, the party and its leader, Oleg Tiahnibok, were expelled from a political union with Nascha Ukraina, or "Our Ukraine." Grounds for the expulsion was a speech Tiahnibok gave that was both anti-Semitic and anti-immigrant, causing an uproar in Ukraine.

Tiahnibok sought a fresh start under the name "Svoboda." Naming the group "Freedom" was in vogue among right-wing radical groups throughout Europe at that time - due largely to the success of the Freedom Party of Austria. After the party's rechristening, Svoboda removed all symbols of National Socialism, including those used by Nazi military SS "death squad" groups. 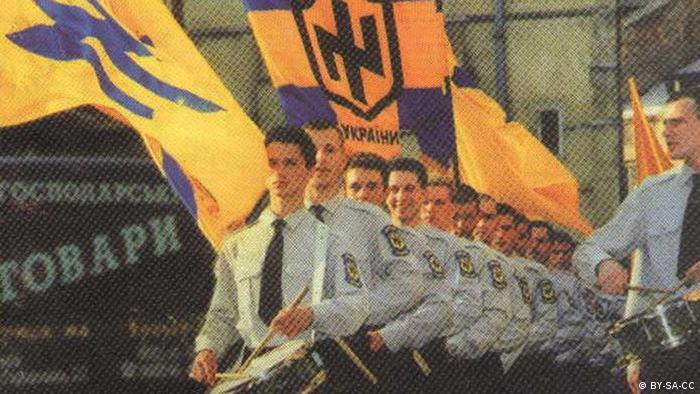 Swedish historian Per Rudling has been researching the historical origins of Ukrainian nationalism. Even if Svoboda no longer uses SS symbols officially, he believes that the party hasn't oriented itself away from National Socialist thinking.

Just as they did before the group's rebranding, party representatives have taken part in public marches commemorating Ukrainian SS volunteer soldier divisions such as the "Galicia" group. For nationalists, these soldiers were "freedom fighters" since they fought against reviled Bolschevism. 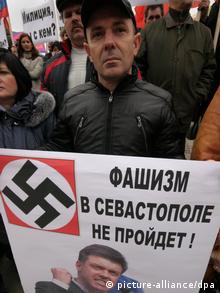 "The involvement of Ukranian nationalists in ethnic cleansing during World War II and the anti-Semitic and racist hatred that went with it will be denied once again," Rudling said. He sees politicians in the east and west of the country utilizing Ukrainian history to their own political ends.

"They look after old historical myths and create new ones," Rudling said. Ukraine's role in the World War II, he believes, will not be thoroughly reviewed.

Eight years since Oleg Tiahnibok's ejection from his party's union under Our Ukraine, Svoboda's chairman is in parliament once more. This time he's not alone. Through the strength of its merger with Unified Opposition, his party holds a firm position in parliament.

For German political analyst Andreas Umland, who teaches at the Mohyla Academy in Kyiv, the success of the radical right is no surprise. For years, Umland said, Tiahnibok has been painted on TV talk shows as an opponent of merit in stark contrast to the unpopular current president Viktor Yanukovych.

"Many Ukrainians perceive the current government as 'anti-Ukrainian. That's why the radical anti-government party was voted in."

The boxer who wants to save Ukraine

Ukrainian boxer Vitali Klitschko is looking to follow in the footsteps of Arnold Schwarzenegger. The world heavyweight champion is set to become the third strongest force in Ukrainian politics. (22.10.2012)