The boxer who wants to save Ukraine

Ukrainian boxer Vitali Klitschko is looking to follow in the footsteps of Arnold Schwarzenegger. The world heavyweight champion is set to become the third strongest force in Ukrainian politics. 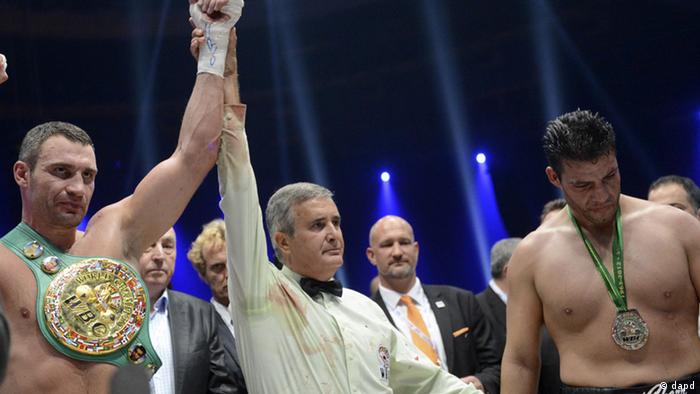 Vitali Klitschko is preparing for a very different fight to the kind the WBC heavyweight belt holder is used to. On Sunday, October 28, Ukraine will vote for a new parliament and Klitschko's party, UDAR, is one of the favorites. The name stands for Ukrainian Democratic Alliance for Reform, but in Ukrainian it literally means "punch," and here the pun is most certainly intended.

It was a long path that led the son of a Soviet officer and a teacher to the summit of the boxing world. Klitschko was born in 1971 in the central Asian Kirghiz Soviet Socialist Republic, now Kyrgyzstan. He began boxing school at the age of 13, and though that sport was to become his passion, his first international success came as a kick boxer. He won multiple world championships in the US before beginning his career as a professional boxer. 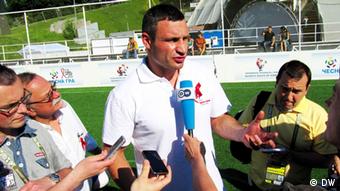 Klitschko could become the third strongest political force in Ukraine

He moved to Germany with his brother Vladimir in 1996. The two brothers set up shop in Hamburg, where they worked on their dream of becoming the two most successful boxers in the world. It came true in 2008, when all of the world's relevant boxing belts belonged to the Klitschko family.

Vitali Klitschko has been less successful in the world of politics. He first showed interest in Ukrainian affairs during the Orange Revolution in 2004, when he announced his backing for the pro-Western presidential candidate Viktor Yushchenko, whose advisor he later became. Klitschko went on to launch a failed bid to enter parliament as the head of a party alliance in 2006.

He was also unsuccessful in two separate attempts to become the mayor of the nation's capital. But he didn't let that discourage him, and Klitschko succeeded in building up a faction in Kyiv's city council.

But Klitschko's popularity has more than tripled since changing the name of his relatively unknown party to UDAR. Armed with the slogan "It's time for UDAR," Klitschko has gained the most approval among young voters. Recent polls say the center-right party is creeping up on the opposition Batkivshchyna ["Homeland"] party, headed by the imprisoned former Prime Minister Yulia Tymoshenko.

Experts see the key to Klitschko's success in the general desire for new faces in Ukrainian politics. The boxing champion is seen as a viable "alternative," said Winfried Schneider-Deters, former head of the Kyiv office of Germany's Friedrich Ebert foundation. But it's debatable how new the party really is. UDAR includes a number of high-ranking politicians who were part of Yushchenko's team. 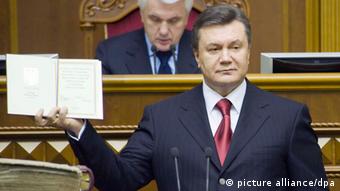 Klitschko says he wants to bring down Yanukovych

The fact that Klitschko has earned his money abroad with his own physical strength will play a role in the campaign, Schneider-Deters told DW. In a country like Ukraine, where corruption is a charge commonly levelled at politicians, Klitschko seems cleaner than most. His popularity as a world champion should also not be underrated, said Schneider-Deters, who sees in Klitschko as a kind of Arnold Schwarzenegger figure. "The Californians elect a Hollywood star as governor; why can't the Ukrainians elect an athlete?"

Klitschko's campaign manifesto contains general statements about "combating corruption" and "establishing European standards of living." But there is no information regarding Ukraine's EU accession bid. "Klitschko wants to make everybody happy," said one columnist in Kyiv. Klitschko himself says his aim is to take power from the incumbent Yanukovych, who faces opposition allegations of authoritarianism and abuse of justice.

Klitschko won't be able to bring down Yanukovych on his own. And yet the rising political star heightened tensions in the opposition corner last week by refusing to sign a coalition deal with the United Opposition, an alliance of opposition parties headed by Tymoshenko's Batkivshchyna. But this was a good move, says Schneider-Deters, because it will result in "more votes overall for the parties opposed to Yanukovych."

Less than 20 percent of Ukrainians expect a fair election in October, according to a new survey by DW. The latest results reflect a skepticism that has been growing over recent months. (13.09.2012)