Ukrainians and Poles: Whose milk tastes better? | Europe| News and current affairs from around the continent | DW | 09.06.2019

The Polish-Ukrainian border region benefits economically from its geographical location. But people on both sides live with the traumas of history — and continue to harbor prejudices. 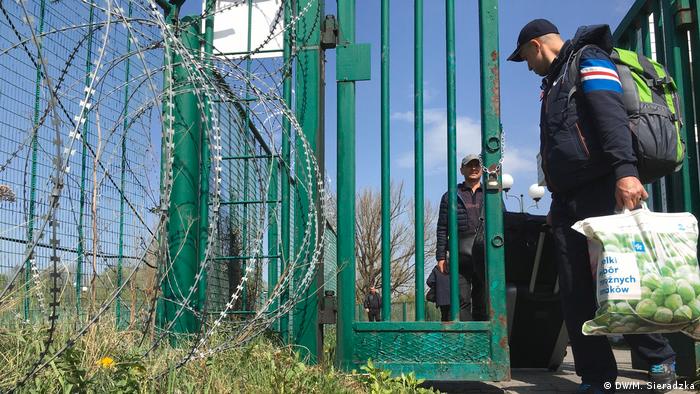 The crumbling pavement in front of the town hall in Mostyska, Ukraine, is in dire need of repair. The two benches in the small green square in front of the building also appear to be years overdue for a coat of paint. But who is going to do the work?

"Only two years ago, when we started renovating this small square in front of the town hall, there were four crews, each with five workers. Now I can't find anyone to do these jobs," the town mayor, Serhii Storozhuk, says in frustration.

Officially, 9,000 people live in Mostyska, but in reality, the number is much smaller because many of its inhabitants work in neighboring Poland. The EU border is only 15 kilometers (9.3 miles) west of the town.

Storozhuk relates a joke that he says is frequently heard in the town: "If things go on like this, there will be only three people still working in in Mostyska: the mayor, the community leader, and the local government representative. Apart from them, the only ones to stay will be the pensioners!"

But Mostyska's location also brings financial advantages to its inhabitants, he says.

"Some 200 or 300 residents cross the border every day. At least they earn a few euros there," according to Sorozhuk. 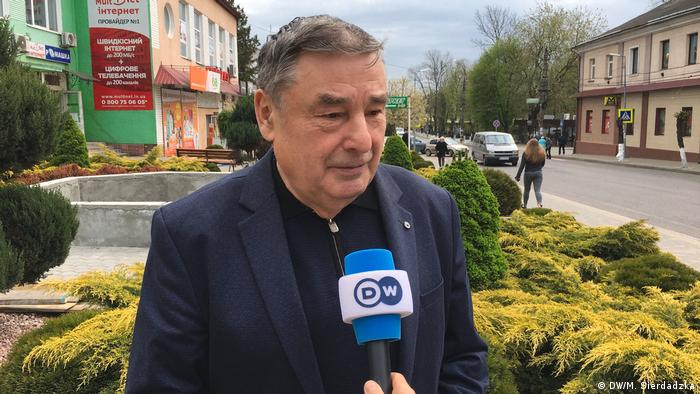 Storozhuk says there is a lack of labor in his city

Cross-border trade on the small scale

The bus ride to the Ukrainian-Polish border takes only half an hour. On the Ukrainian side, a packet of cigarettes costs about €1 ($1.30) but only a few hundred meters (yards) further, at the Polish border bazaar of Medyka, the price is double that.

Those crossing from Ukraine to Poland are allowed to take one liter of vodka and two packs of cigarettes with them. For an "ant" — as the pedestrian commuters are called in the region — every crossing can bring a profit of a few euros.

Many Ukrainians like to buy Polish food with the money they earn in this way on the other side: "Especially quark, milk and some types of meat taste better," is the reason given by many of the men and women carrying heavy bags on foot back across the border to Ukraine.

For those with cars, it's possible to transport more goods to Ukraine. A load with a value of up to €500 and weighing up to 50 kilograms (110 pounds) is duty-free.

Polish food ends up at markets for wealthy Ukrainians and in the restaurants of Lviv. Old but functioning electrical appliances previously bought from German recycling companies are also transported to Ukraine. 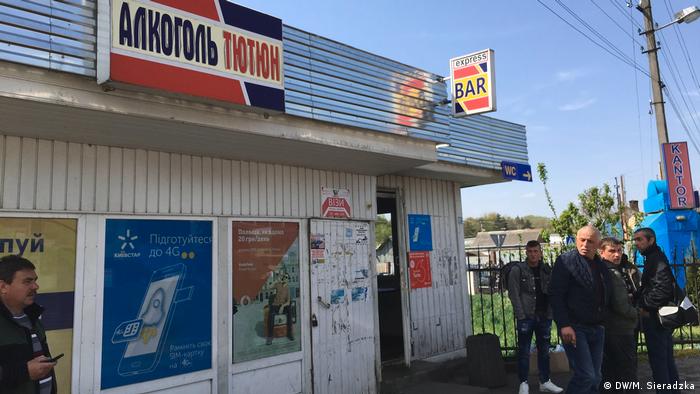 Cigarettes and alcohol are cheaper in Ukraine

Those who have money often buy large quantities of food or household appliances on the Polish side when they are going cheap.  These are then transported back to Ukraine bit by bit so that no duties need to be paid.

Hanna Wanio lives on the Ukrainian side of the border in Krakowez and shops regularly on the Polish side.

"I get on well with the Poles; there's never a problem. I'm glad that I live on the border so I can commute," she says. But she says it bothers her how politicians sometimes "play people off against each other." 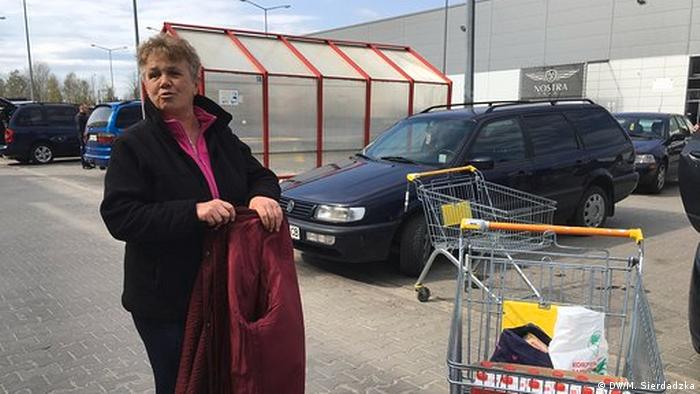 In Przemysl, Poland, Tetyana Nakonieczna, a member of the Association of Ukrainians in Poland, strives for good relations between the neighbors. Nakonieczna, an ethnic Ukrainian, grew up in the Polish town then moved to Canada for several years before returning to her hometown in 2013.

"Straight after I got back, I was shocked by a historical re-enactment of the Volhynia massacre," says Nakonieczna, referring to the slaughter of Poles living in the Volhynia region in 1943.  The anti-Ukrainian propaganda was not without consequences: Three years later, Ukrainians were attacked by Polish nationalists during a religious-patriotic procession. 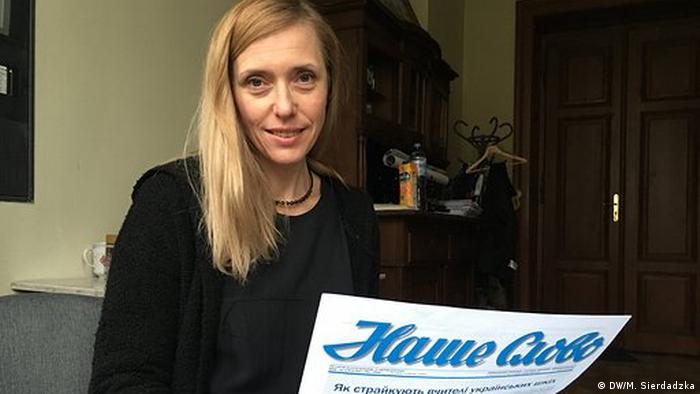 In another sign of continuing tensions, in 2014 a group of Ukrainian students photographed themselves at a party in Przemysl with the Ukrainian Insurgent Army (UPA) flag. This partisan organization was responsible for the massacre.

Nakonieczna still finds the atmosphere fraught. But she says she always reads any reports about Polish-Ukrainian conflicts on Russian websites first.

"This could be a sign of Russian influence. I'm sure Russia is interested in fueling the conflict," she says.

Nakonieczna is friends with a Ukrainian couple, the Korpans, that has lived in Przemysl for 12 years.

"When we came here, there were no conflicts," Oleh Korpan remembers.

"We learned Polish quickly and feel at home here. The problems between the Poles and the Ukrainians come from above; maybe some people want to profit from them," he says. 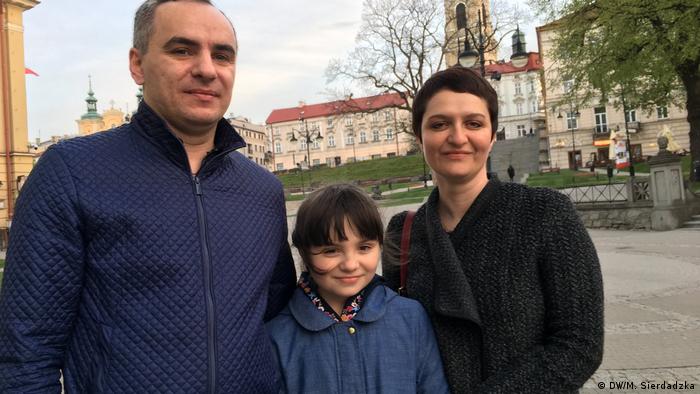 The Korpans live in Poland with their daughter, Marta

Oleh is a doctor and his wife, Natalia, a math teacher. Highly qualified specialists such as the Korpans are desperately needed in Poland.

Even though the Polish economy is booming, about 2 million Poles have immigrated to Western countries since the country joined the EU in 2004. Often Ukrainians fill the gaps left in the Polish labor market: Today, more than a million Ukrainian citizens work in Poland.

Natalia and Oleh earn much more in Przemysl than their friends back home. "When you hear about the current frictions, sometimes you think about returning. But we don't want to — we like life here," says Natalia. And they also think Polish milk tastes better.

Polish director Wojciech Smarzowski’s film 'Wolyn' is the first to deal with the war-time Volhynia Massacres. With today's Ukrainian crisis playing itself out, this raw and powerful movie is a reminder of crises past. (28.10.2016)