Thousands have marched in the Ukrainian capital, Kyiv, to mark the 106th anniversary of the birth of controversial nationalist Stepan Bandera. He has become an icon for right-wingers in the country. 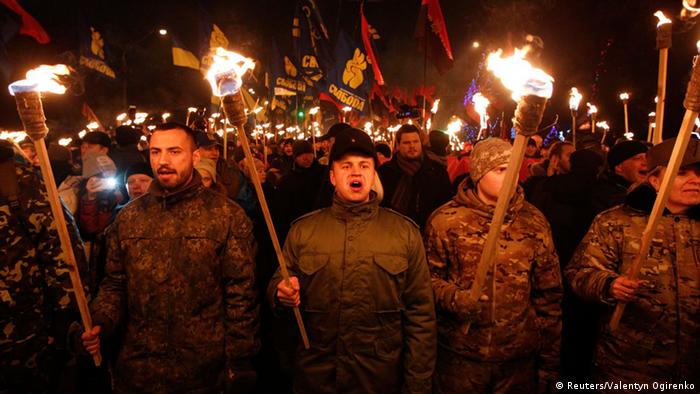 Thousands of Ukrainian nationalists marched through Kyiv on Thursday in honor of the anti-Soviet insurgent Stepan Bandera, who would have turned 106 on January 1.

Organizers spoke of 5,000 participants, while media put the figure at around 2,000.

Some chanted "Ukraine belongs to Ukrainians" and "Bandera will return and restore order" while marching in the torchlight procession.

Hopes and fears for the New Year in Ukraine

President Poroshenko recently called 2014 Ukraine's most difficult year in 75 years. With war still waging in the east and an economy in crisis, 2015 doesn't look like it will be much easier. (01.01.2015)

Serbia: A new mediator in the Ukraine conflict?

Serbia takes over the presidency of the OSCE in 2015. Providing a solution to the Ukraine crisis is a top priority for the organization. Will Belgrade, with its good relations to both East and West, be able to mediate? (01.01.2015)

The route of the march took participants along the same streets where three months of mass rallies took place last winter that led to the ouster of pro-Moscow President Viktor Yanukovych.

Those pro-European rallies used the slogan of Bandera's nationalist movement - "Glory to Ukraine! Glory to the heroes" - as their catchphrase.

Bandera attempted to establish a Ukrainian state independent of the Soviet Union during World War II, and remains a very controversial figure in the country.

Ukraine's former Soviet ruler, Russia, has branded him a Nazi collaborator for fighting alongside invading German forces during the war, a view shared by many in Russian-speaking eastern Ukraine.

Right-wing nationalists in Ukraine, however, have adopted Bandera, who died in 1959 after being poisoned by a Soviet KGB agent while in exile in Munich, as an icon. Some have called for him to be declared a "Hero of Ukraine" - an honor posthumously granted to Bandera in 2010 by pro-Western President Viktor Yushchenko, before it was revoked by Yanukovych in 2013 shortly before the latter's ouster.

Bandera is a particularly divisive figure with regard to the current conflict in Ukraine, in which rebels in the Russian-speaking east are waging an insurgency against the Kyiv government. 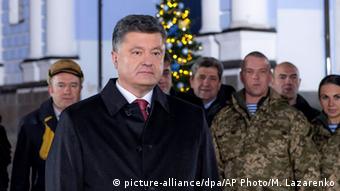 Poroshenko has vowed to end the insurgency in the east

In the traditional presidential New Year's Eve message on Wednesday, current President Petro Poroshenko renewed a pledge to put an end to the fighting, which has claimed more than 4,700 lives since April.

"We will definitely win this patriotic war because for us, it is just. Truth is on our side. God is with us," he said.

Poroshenko is tentatively expected to meet with Russian President Vladimir Putin in Kazakhstan on January 15 to discuss the crisis.

Poroshenko has said German Chancellor Angela Merkel and French President Francois Hollande would also be at the meeting.

Kyiv and many Western countries accuse Moscow of aiding the insurgents, something Russia has always denied.