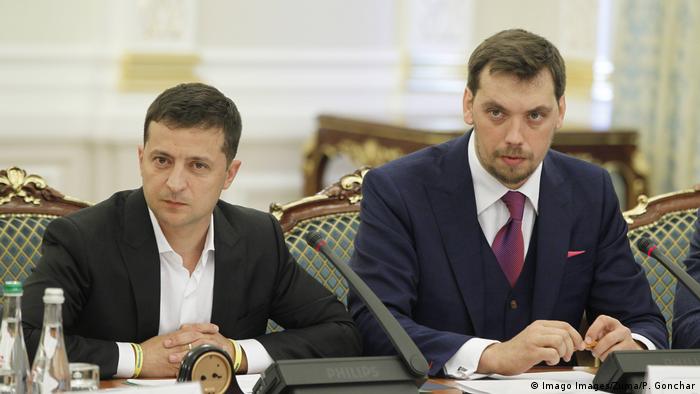 Honcharuk was caught up in controversy after an audio recording emerged earlier this week that appeared to show him questioning Zelenskiy's ability to manage the economy.

He called Zelenskiy a "layman" in economics and said the president should be better educated. Zelenskiy is a former comedian with no political experience until he came into office in 2019.

Zelenskiy a 'model of decency'

"I came to the position to fulfill the program of the president. He is for me a model of openness and decency," Honcharuk said earlier on Friday on Facebook.

"However, in order to remove any doubts about our respect and trust in the president, I wrote a letter of resignation and handed it to the president with the right to submit it to Parliament," he added.

Honcharuk had claimed the recording was a compilation of "fragments of recorded government meetings," and he blamed unidentified "influential groups" for making it seem as if he didn't respect the president.

Zelenskiy responded later on Friday, dismissing the resignation. He asked Honcharuk to present a report on the results of his work to parliament.

"I have decided to give you and your government a second chance," Zelenskiy said, though he did admit that the situation with the tape was "unpleasant."

He added that this was not the time to shake Ukraine politically. Zelenskiy is currently caught up in the ongoing impeachment trial of US President Donald Trump. Trump is accused of withholding $400 million (€360 million) in military aid to Ukraine in order to pressure Zelenskiy to investigate Trump's political rival Joe Biden and his son.

Honcharuk has been prime minister for less than six months. The former lawyer and deputy head of the prime minister's office became Ukraine's youngest ever head of government at the age of 35 when he took on the role in August of last year.

A watchdog has said the White House violated federal law by withholding aid intended for Ukraine. It comes as Ukraine announced an investigation into possible illegal surveillance of former US Ambassador Yovanovitch. (16.01.2020)

Ukraine's Zelenskiy has asked Germany to "politically contribute" to the investigation into the downing of a Ukrainian aircraft near Tehran. Kyiv expects Iran — which shot down the plane — to compensate the victims. (15.01.2020)

The comments mark the first official admission that the 'technical malfunction' reason given was untrue. Javad Zarif also rejected the prospect of direct nuclear negotiations with the United States. (15.01.2020)