Ukraine's national currency, the hryvnia, has fallen to new lows against the dollar and euro. The war-torn country, flirting with insolvency since long before the unrest, is negotiating emergency loans from the IMF. 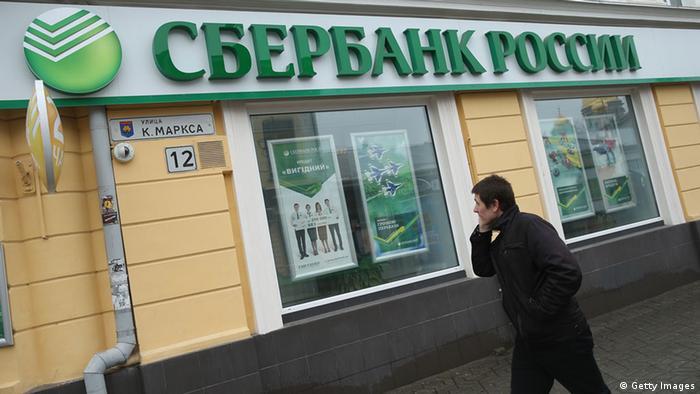 On Monday, one US dollar cost more than 26 hryvnia and one euro 29.6 hryvnia, according to the Ukrainian Central Bank's website. Briefly, the currency hit all-time lows against both the euro and dollar. On February 1, around 16 hryvnia would have bought one euro. Most of the currency's February free-fall was notched in trading on February 5.

At the weekend, the Ukrainian government raised its inflation prediction for this year from 17 to 26 percent.

The International Monetary Fund (IMF) announced that it would offer Ukraine a new financial rescue plan to shore up the country's war-torn economy - in return for "ambitious reforms." The four-year program amounts to 17.5 billion dollars and Kyiv would like to receive 10.8 billion, the maximum allowed under IMF rules, in the first year, Ukrainian Finance Minister Natalia Yaresko said in a televised briefing on Monday. She declared that the Ukrainian government had not yet discussed the exact amount of the next tranche of financial aid from the IMF.

Last week, the Fitch rating agency downgraded Ukraine from CCC to CC, which means a default is likely. According to the Ukrainian Central Bank's figures, the country's currency reserves dwindled from almost $15 billion in September 2014 to $5.4 billion in January.

Moscow refused Kyiv's request of restructuring its debt to Russia. Moscow had agreed to provide a $15 billion bailout loan to Ukraine in December 2013, before the pro-Russian president Viktor Yanukovich was toppled. After the first 3 billion installment, with Yanukovich no longer in office, Russia froze the loan. Russian Finance Minister Anton Siluanov said that Moscow was expecting its 3 billion loan to be repaid in full this year.

"Any budget income in foreign currency is important to us," Siluanov said on the sidelines of the G20 summit of finance ministers in Istanbul on February 10. Russia's economy is heavily affected by international sanctions and falling oil prices - like the hryvnia, the ruble currency has also been in freefall in recent months.

Doubts cast on plans for to withdraw heavy weapons in Ukraine

There are concerns about the stability of the latest ceasefire to be implemented in eastern Ukraine. The next major test could be whether the parties to the conflict pull back heavy weapons as called for in the deal. (16.02.2015)

The Ukraine summit has produced a ceasefire deal. But the agreement leaves many open questions. There is every reason to be skeptical whether the killing in eastern Ukraine will really cease, says Ingo Mannteufel. (12.02.2015)